Snowy Z (as Chris would say)

Well, there was enough snow for me to build a snowman.  A little one, admittedly, because I didn't get around to it until the afternoon, by which time the sun had been shining and some of it had thawed.  If we get more snow, I'll build a bigger one.

Al and the children built one too - Al being the smart one of the family, he managed to get arms to stay on. In fact, it was good building snow, sticking together well and not too powdery.

I'd quite forgotten, by the way, that I never wrote final "bringing on the wall" posts - if you read Dave's blog, you'll know that he and the Sage put in a couple of final sessions at the start of this month to finish it off.  They finished exactly four weeks ago and ended with a celebratory bonfire and fireworks, it also being Bonfire Night weekend.

My friend is still seriously ill and they hope to fly him back to hospital in this country in the next day or two.  He is in intensive care, but they have not been able to diagnose what the cause of the problem is yet.  Very worrying and we feel for his wife too, living in a hotel so far from home.  His daughters have flown out to be with them; one of them has a paraplegic husband and a young baby, but the husband has to have full-time carers so it's not as difficult as leaving an invalid usually would be, in practical terms anyway.

You'll want snowman photos, of course.  Here you are - it was a brighter afternoon than these show, but I took them on my phone, which is always a bit dark.  There are a couple of pictures of the wall too.  As you see, not much snow was left by 2 o'clock this afternoon.  But we can still hope! 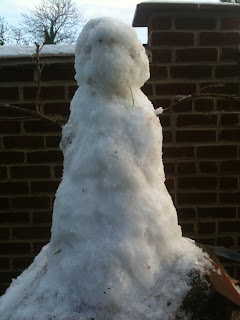 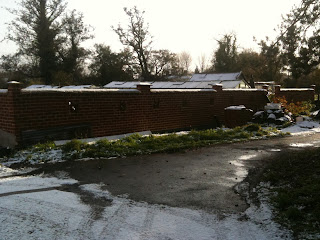 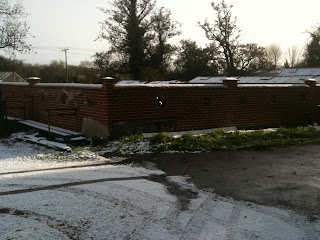 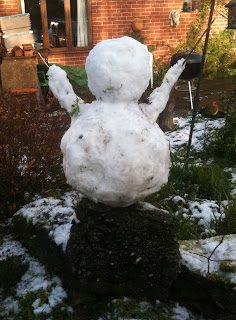 Oh, and congratulations to Simon (Eddie 2-Sox)'s son, Sam, on his success in the kuk sool won UK championships in Liverpool today.
Posted by Z at 4:36 pm

Don't know why I spent so much time pointing those ridge tiles, if you're going to allow snow to cover them up.

What? English snowmen don't have faces? We usually get our first sticking snow the latter part of Dec. We had our Thanksgiving hol. this week and I had to get out to try to walk off some of the calories. It was a lovely warmish day, in the 50F's.

I thought it was the icing on the cake, as it were, Dave.

I did add features, Marion, but they fell off and mashed the head as they went and I had to make another one. I couldn't quite mind enough to persevere any more. We don't usually get snow in November either. Last year, we had a fair bit the week before Christmas and it took us by surprise.

Great snowpeople! It's not yet enough around here to try this. But the coming days will see snow and freezing temperatures. My sketchbook ...

Fabulous! Mago, I've been standing here for ten minutes while my breakfast burns, chortling too much to care.

Lovely snowman. Is it still cold enough for him to survive?
We haven't had any snow here (yet) but I've promised our youngest cat that I'll make her a snowcat when there's enough.

I might have guessed. Clearly the spirit of Christmas has taken a firm hold.

Love the snowman scetchbook. It is very cold here but just a skiff of snow. No, maybe just a dusting.

Quite cold enough today, Sandy. I''ve made snowdogs and snowbabies in my time, but not tried a cat yet, or a robin - though we're all bobbin' along here, Chris. It seems to be unusually cold everywhere, LZM. Martina sent me photos of Seattle the other day, far colder there than here, in fact.

Still waitting for our snow!

Thank you Z, Sam is rightly proud of himself. And I "might" be a little bit proud of him.