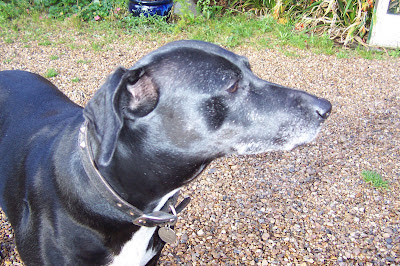 I thought I'd tell you how Tilly joined our family, nine years ago.

My mother and I went to a small town a few miles away, to buy some curtain track. While we were in the shop, a young woman came in with a small dog on a big chain. It was the sort of choke-chain more usually used to keep a Rottweiler under control. My mother and I looked at the dog and then at each other in horror. She was stick-thin, you could see her ribs, her hip-bones and her spine sticking out. Her tail was between her legs and she was shaking. Her teats were swollen with milk. However, her black coat was surprisingly glossy and she had huge dark eyes in her pinched little face.

Her owner looked poor. She had on a shabby overcoat, her red hands were chapped and she looked nervous. My mother spoke to her politely. "What a dear little dog" she said. "Has she had puppies?"

In the next few minutes, we were told that the dog was only fifteen months old and the puppies were six weeks; nearly weaned and the pet shop had agreed to take them, but the woman was moving to a council flat and she had been told she could keep her two cats but not take a dog. She had put a card offering her free to a good home, in the local supermarket, but to no avail.

Mummy and I looked at each other again. We completed our purchases and went outside with the young woman to talk on the pavement. "I know she's a bit thin" she said. "I've doubled the amount I feed her, but she hasn't put much weight on." She, herself, looked as if she could do with a good meal. Her top teeth were worn to blackened stumps and the bottom ones were discoloured. She was quite simple and, it transpired, was moving to sheltered housing as she could hardly manage to look after herself alone. She wasn't on the phone, so I gave her my number and asked her to phone in an hour.

Mummy and I talked on the way home. Her first thought was to take her, but her health was not very good and she already had a very large greyhound in her bungalow. She wondered if she should offer to pay a dog sanctuary to look after her, have her spayed and a new home found. I said I'd talk to the Sage.

It had taken me a long time to persuade him that we should have a dog. After our old dog Simon died, it took over three years to talk him round. Finally, he agreed, whereupon it took me nearly another year to find the perfect puppy...and that's another story. I knew he would not be willing to have a second. I also knew me.

I told him all about it and asked him to look at the dog. "She's timid and cowed," I said, "but you can see what a sweet nature she has. I've got a really strong feeling about this and it's not often I say that." It was true and he agreed to come over to H@rleston with me, once the woman, Miss P, rang back.

She lived in a little flat behind an Indian takeaway. The kitchen was filthy, with gravy stains running down the cooker and a dirty floor. We told her that we had some shopping to do and would come back in a little while. In fact, we walked round the corner and talked.

I put my case. Miss P had said that the dog, Kilda, was obedient, housetrained and gentle. I could see that our dog Chester would not welcome another dog, but a gentle little bitch was a different matter. She needed a home, she had had a dreadful start in life and whatever would become of her? However, I said, you have the last word.

The Sage carefully evaluated what I'd said. He agreed, but he felt that it was too much of a commitment. We had only her word that the dog had a good nature. She might be sickly. He was sorry, but he voted no. I sighed. I went through my arguments again. I mentioned how well she would fit in the family. But you have the last word. "No," said the Sage. I explained it all over again, reminded him of how rarely I made demands and how I always deferred to him in important decisions. "No," he said again, with kindly face and furrowed brow. I explained once more about how much I wanted this dog. On the other hand, I was not looking for trouble. If she was difficult, sickly, bad-tempered, I'd be willing to look for another home for her, but in the meantime I would have nursed her back to health. However, I was sure that we'd want to keep her. But you have the final word. The Sage still demurred.

This discussion lasted a full hour. In the end, the Sage realised that, in this case, 'the final word' was "Yes" and I wouldn't let go until he said it. Once he'd grasped that, he said "Yes" and we went back, told Miss P we'd take Kilda but that we needed to go home, buy a basket and a collar and lead and we'd be back later in the afternoon.