Tilly, the dog with Two Tales 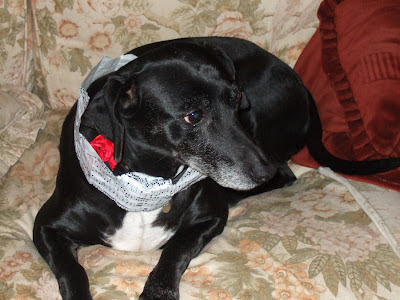 We went back with Ro, who was back from school by then. I took a sheet. The dog was not very clean, the house was smelly and there probably were fleas. The poor little thing was frightened and trembled when we took her. Miss P warned us that she had only been in a car once and had been sick. I said she was welcome to phone to know how she was getting on. She was obviously fond of the little dog and reluctant to part with her.

When Chester, our Irish setter/bearded collie cross saw her, he was thrilled. He sniffed her all over, while she cowered, terrified. We put him in the house and fetched her some food, which she wolfed down. Then I got a bucket of warm water, gave her a bath and dried her. I decided to walk both dogs round the village, so that they could get used to each other.

It was quite embarrassing as she was so thin, it looked as if I was the one neglecting her. However, by the time we'd been round the block, Chester was less curious about her and she was not trembling so much. When we arrived home, it was time for Chester to eat and I gave Kilda another small meal. It vanished in no time and she eyed his bowlful enviously. She couldn't resist. She darted in to steal a mouthful.

Darling Chester stepped back and let her.

You could see the thought going through her head. "The huge dog is letting me eat his meal? He's not a threat! He's - he's a pushover!!"

It was as easy as that. From then on, they adored each other. He never licked his bowl clean again, but left a little for her to finish. She deferred to him, but was unafraid. He did fancy her rotten and she flirted with him, wafting herself past when he was lying down and then scurrying away as soon as he started sniffing her. For this reason, we had her spayed as soon as the vet said it was time. Afterwards, however, she couldn't understand why she had lost her power to attract and this made her rather miserable. I felt bad that we'd taken away her femininity, but it was too late and we'd had no real choice anyway.

The first time we let her out of the house, she ran straight to the chickens and started to chase them. I called her back and told her to stop. The next day, I saw her rushing joyfully, feathers in mouth, chasing an indignant and frightened bantam. I shouted at her and, when she came, grabbed her and told her she must never do that again. She was very upset and never did.

For a long time, we had to be very gentle with her. She was afraid of children and I always wondered if the local kids at her previous home had made fun of her owner, maybe chased or thrown things. It was never necessary to say anything if she misbehaved - a look would do. She liked to curl up with me in an armchair, but she always wanted to sit behind me. I still tend to perch at the front of chairs, although she usually stretches out on the sofa nowadays.

Her name was changed within a day, when Ro called her "Kill" for short. We decided to choose a name that sounded almost the same as Kilda, not to confuse her. It came down to Hilda or Mathilda, so Tilly it is.

Oh - and Sage was besotted with her in no time. He's given up arguing with me altogether. As I've pointed out, I'm a very reasonable woman. I'm always going to agree that he's right - unless I am. And in that case, he might as well agree with me.
Posted by Z at 9:03 am

I'm a sucker for a happy ending! Pets bring such pleasure.

It sounds a soppy story, doesn't it. But it is absolutely true! And she's such a nice-natured dog that you can pamper her all you like and she doesn't take advantage.

I am just so impressed with the way you handle the Sage. You could teach younger wives a thing or two.

Seaview Cottage, hello and welcome. The house I grew up in was called Seaview. it was a good two miles from the sea and the view was theoretical and trigonometrical because my grandfather was a mathematician.

Yes, I've never been to that shop before or since. It was the happiest chance.

Wendz, poor chap. I don't usually do that sort of thing, but that time I had to. I knew it was right. I was so sweet and reasonable though, poor chap hadn't a chance. The way I kept saying 'but you have the final word' still makes me giggle.

I waited 8 years for a third baby and 4 years for a dog, but I had time to be patient. This was an emergency!

We'll be over in April, so hopefully we might meet Tilly!

I can't remember the date we agreed to come over though, I was very, very drunk.

That will be great. I hope it's early or late April though, as I'm away in the middle of the month.

That's a super tale (tail) Z. I remember when I saw Murphy looking in at the window of the house we were viewing. His owners made him stay outside and sleep in the garage. I couldn't get him out of my mind. I sent Mr P a text message "can we have Murphy?". Luckily for him, he knew the answer had to be yes! We bought the house, Murphy moved inside (and upstairs) and we've all lived happily ever after - phew! Chester sounds a darling as well.

Hello Mrs Rine! How lovely to meet you.

I miss Chester awfully. He and I didn't need words to communicate.

I don't usually blog - I don't need to as I get a running commentary from Mr P! He sent me Tilly's Tale from his hideaway at the NEC. It's his last day today and then we are all meeting up in the Peak District for a very long weekend. No doubt their will be pics of Murph and Oz, looking very wet, on hills shortly. Thanks for sharing the story Z, give Tilly a pat from me.

oh God, his skin colour is really quite a sight.

i never had dogs. can never imagine having one. its not that i dont like them. but theyre bound to die sooner than us and im pretty horrible coping with death.

Not only is it a beautiful tale, but Tilly is very much in the mould of the much missed Suzie, who came to live with us in a similar fashion.

Maggie, that was the reason my husband took so long to persuade to have a dog at all. He said it's so hard when it dies. I agreed, but you've had 10 or 15 years and if you trade one against the other, it's worth it.

Chairwoman, each dog we have is never forgotten, is it.