Z might have had a nap at some time, too


I looked after young Gus today.  As I said  a couple of days ago, he's had a bad attack of croup - it's an infection going round, apparently, though he's not infectious any more.  But his mother had something on at work that she neither felt able to miss nor to cancel and I was free, so I headed over there this morning. 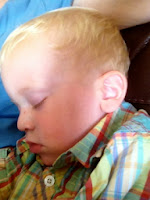 And it was the easiest babysitting I could have had.  He stood for some time watching television (yes, I have no hesitation in using the soothing powers of children's tv once in a while) and then I realised he was leaning heavily on a table and nearly asleep.  So I scooped him up and sat him by me on the sofa and after a while I suspected he had gone to sleep.  His breathing was very wheezy and I couldn't recognise the moment when he did actually sleep, I had to use the camera on my phone reversed to see his face.  And he slept for an hour and a half from the time I realised he had dropped off, so it was longer than that. 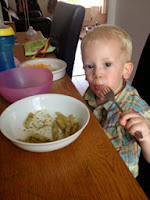 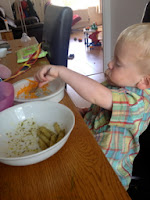 He woke at 1 o'clock, so I gave him a drink and went to find him some lunch.  Not having expected him to be home, there wasn't a lot in the fridge, but I gave him some grapes and cucumber to keep him going and then grated him cheese while I cooked some pasta.  Pasta and pesto, the great standby of the modern mother.  He ate a lot of everything, he was very hungry. 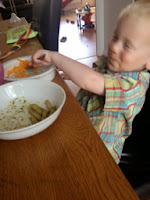 And he cheered up by the minute.  So, since he'd cleared his plate, I offered him a chocolate mousse that I found in the fridge. 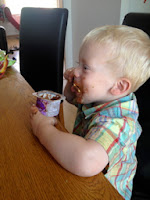 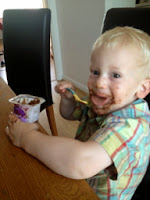 And that made him really happy. 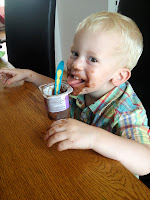 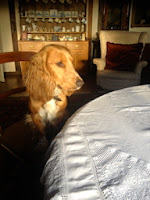 Rupert also sits very nicely at the dining table, by the way.

Weeza rather enjoyed her meeting.  We emailed each other every so often during the day and she said, at lunchtime, "I'm just back from my trog around the estate - 2.5hrs we were poking about hedgerows!!  Excellent stuff though - I love hearing old boys talk about 'back in the day.'"  Very like her parents, is our Weeza.
Posted by Z at 9:48 pm

Oh that Gus. You can tell from the photos that he is quite the charmer.

Oh yes, he was playing to the camera!

Yeah, but, old boys in this country don't say "back in the day" - that's a nasty creepin' Americanism.

In this part of the world, old boys grew up learning Americanisms because of the troops over here during the war. Even Russell did.

Over there again today, he's still under the weather.

I still feel bad about disturbing his nap on the day of the blog meet. As the old boys say, "That hadn't better need be, I shouldn't think neither."

When grandsons are that young, you will do anything to please them, even if it includes giving them chocolate mousse. There is such joy in watching them eat it with their whole face.

Is pasto and pesto the new in thing? I could tell quite a story about driving kids round the dreadful ring roads of Washington to George Washington Hospital downtown so they could bond with their new brother (no place to park, $12 to park in parking garage, elevators in hospital, got to have ID to get in, no I am not going to steal a baby, I came in with enough) then back to Maryland, getting lost and being expected to give them pasta and pesto. I gave them what I could and shoved as many as possible down for a nap.But they might find my comment!

Poor old Gus; I hope he is properly better soon. Granny is obviously well aware that there are few troubles that cannot be eased by a bit of chocolate.

I think Gus looks like a miniature version of The Sage.

No one holds it against you, Sir B, please don't. I mean, it's not as if you woke me from a nap!

I did want to give the poor lad a treat, Irene, it was such a pleasure to see him smile.

It's the modern equivalent of beans on toast, Beryl. Having a lot of basil in the garden at present, I'm making and eating it in quantities myself too. Regarding the rest - I feel for you.

Breathing better today, but still not right. Weeza will see how he is in the morning - hopes to send him to the childminder, but Granny might be called on, in which case I have arrangements to unarrange.

It's horrid when they're small and not well.

I've found it doesn't change when they're 19 and still want their mum.