The dog just nudged the keyboard, with the result that Neutral Milk Hotel is playing on iTunes, all unbidden.  In the Aeroplane over the Sea was one of the albums that Ronan bravely loaded onto my new iPod several years ago when I asked him for his chosen music, out of absolute respect for his taste, albeit with no knowledge or understanding of what he liked.  This particular album took me quite two years to appreciate, but I did come to it.

It's not been the most tranquil day because events conspired to prevent me from finishing an Extremely Important Letter, but I finally got to grips with it this afternoon, even though it meant I had to ignore some visitors for a while, with due apologies - I should say that they were really visiting Russell in any case.  My reputation for writing effective letters for any and all occasions haunts me somewhat, but not enough to stop me doing it.

Anyway, Mimi and her mother Lottie arrived this evening and we sat outside, somehow sinking nearly three bottles of wine between us, not that Lottie drank much at all because she was driving home.  It was generally agreed that Russell drank most of it.  My mother was exceptionally friendly with them both and shared a birthday with Mimi, albeit several decades apart, but they loved each other.  It's rather  lovely to think that Mimi is sleeping in Jane's bedroom tonight, Jane would be so happy to know it.

I suddenly discovered yesterday that the front path to the annexe was quite desperately overgrown, but luckily a friend was able to help out with his strimmer tonight and it's all magically been cleared.  I didn't take pictures of that but I've just remembered those I did take.  Al, Dilly and Hadrian called in this morning and Hay wanted to see the tortoise, so Russell went to get her.  I warned about her reaction to being carried and provided newspapers ... oh, sensible Z.  I'm afraid I was intrusive enough to take photos of Edweena's bodily functions.  If you are sensitive about such matters, please look no further.

*sure you want to read this? M'kay*  Photos as they was took. 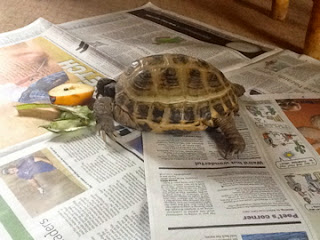 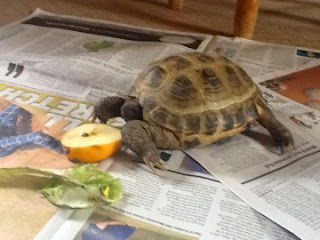 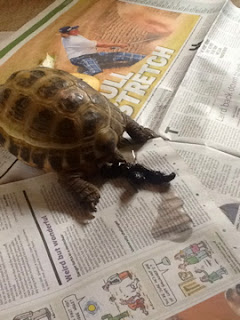 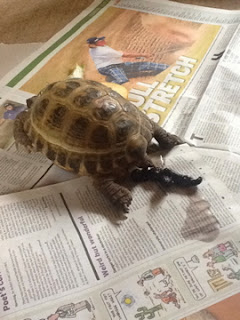 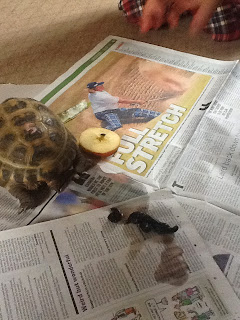 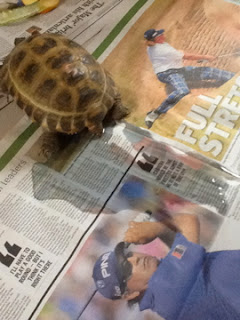 It all started innocently enough, you see.  Edweena noticed the apple and moved towards it.  But she'd already done a little wee and soon a Number 2 followed.  And it all got remarkably - well, there was a lot of it.  And then, when we thought she was all done, having wet the paper again, she suddenly flooded it.  I'm afraid we all laughed like drains, especially Hay.  I will never hold Edweena without taking precautions, being dangled starts her off.

And this afternoon, one of the bantams appeared on the lawn with two fluffy little chicks.  She is extremely cross with us because we've put her in a coop, to save them from possible attack from magpies or other predators.  But it's her fault, she should never have laid away.

Are there pics of the fluffy little chicks too?

Blimey! Some of us are getting some mileage from the tiddling tortoise!

the poo is almost as big as what Kipper produces..and she weighs 35 lbs!
Edweena is a perfect name for the tortoise.

I want to get Dave a tortoise. He's not entertaining the thought. Having seen pix...perhaps I'll have a rethink.

Do they make incontinence pads for tortoises?

I suspect that a conditioned response has been set up there. A bit like Pavlov and the bell - humans and laughing.

The white wording on the orange image is amusing me, in this context.

Hey Z! Quirky blog entries, motorcycle dreams, and now dodgy photographs too? You are a woman of many talents. Indigo x

It's being picked up and having her legs dangle that starts her off, we didn't laugh until after it all happened. Mostly, I was pleased there was plenty of paper down. Though I suppose I could try going out to her run and laughing at her.

I don't like to be categorised you see, Indigo.