There's another thing with Blogger you see.  There doesn't seem to be a way of making the photo at the top any smaller.  I've ticked the 'shrink to *whatevs*' box already or it would be even bigger.  This is just a picture taken on my phone but the only way I can find to make it appear smaller here (I've tried before doing it on the computer before adding it) is to email it to myself and sending it as a smaller file.  There's a choice of sizes of pictures you add to the post, but headers are not so adaptable.

It's just choice I want, and I realise that there's a limit to what I can expect from a free service.

Anyway, what you will have realised it that we're a two-dog family for a couple of weeks.  The first night went well, the only drawback being that my bedroom windows start at knee height because the ceiling is low.  So I couldn't leave the window open in case Rupert jumps out.  We'd already decided he couldn't sleep downstairs with Ben, they'd play all night and Roop might whimper for his family.  So we didn't sleep a whole lot, but only because we were so hot - if it is as muggy tonight, I might move into the spare room where the windows are much higher.

What is it with puppies and paper?  I had a clean tissue on my lap - I'd just used it to wipe a mark from the screen and Rupert jumped up to say hello and stole it.  He and Ben are demolishing it on the carpet now.

Ben has an appointment at the vet's for a vaccination this afternoon.  It'll be fun getting him into the car on my own. 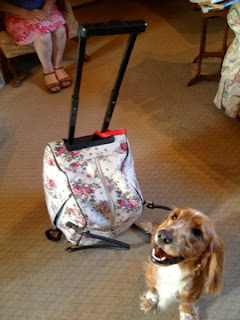 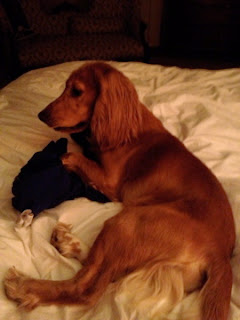 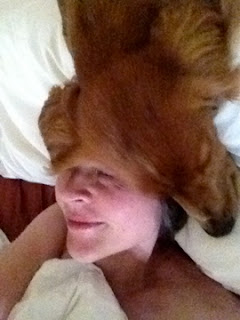 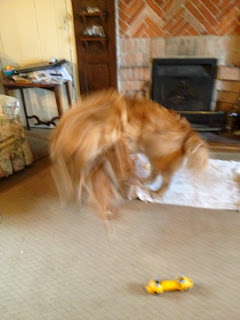 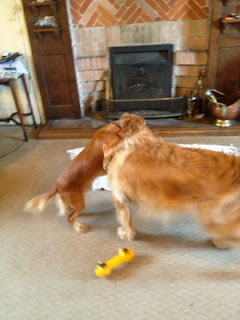 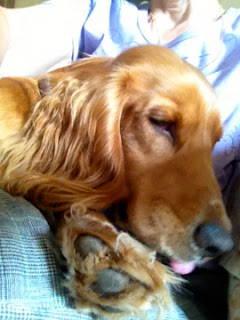 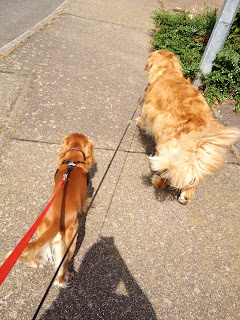 I'll lend you my kittens You'd have your hands *totally* full then.

I'll lend you my kittens You'd have your hands *totally* full then.

I had the opposite problem with photo size on my posts. I wanted them larger but then picture ran into the text in the right column. I invoked another layout which I use now and it allows BIG graphics, which I like.

I really didn't need a fur hat in this heat, Rog!

These were all just snaps on my phone so it wasn't worth enlarging them. Though I see that when you click on them, the one I've put as a header comes up large here and the others don't. Oh well.

Ok, if you go to your Blogger dashboard, click on 'Template' in the menu on the left, and then on 'Edit HTML', you should be able to change the photo's dimensions. Looking at your source code, you'll need to find this bit:

Possibly you'll need to expand your widget elements to see that, but hopefully not. Change the dimensions (the '778' and '584') to something smaller, but still in proportion, and then save the template.

Bear in mind, dear readers, when you think I'm overreacting, that Phil doesn't comment. But he went to the trouble to check this out when he doesn't even use Blogger.

Thank you again, Phil, I found the relevant section but I still couldn't see how to do it. No dimensions are given at all. So I had another look around and it seems that I can't alter dimensions in the template I'm using.

And Phil beat me to it.

I'm not familiar with your template, but if you track the relevant line down, you can generally omit the HEIGHT='' bit and just set the WIDTH to what you want it to be. For example, WIDTH='500'.

Or indeed, vice versa! This means you can worry about whichever of height/width is important to you. The other will be calculated automatically to preserve the aspect ratio of the picture.

If you edit a blog entry and use the HTML view, you can use this to find each photo (by name) and change the displayed size of the pictures in the entry.

Sorry I can't be more help.

I can't unless I change to a different template though. I can change the size of the photo in the post but not in the rest of the layout. It just says 'not applicable for this template' and, since I'm moving anyway, there's no point in playing about with it. I'll just remove the picture, that's the simple way of dealing with it.

Hmmm... I still think it ought to be possible, but without seeing it all in the flesh (and I'm not asking for your log-in details!), it's difficult to say how.

As you say, if you're moving your blog anyway, it's no big deal, and not worth spending the time on. Sorry it wasn't an easy fix though.

One can add custom CSS, I've discovered, but whether I can be bothered to play with it when there are other things in life to do is a moot point!