Unaccustomed as Z is...

The prizegiving went very well.  I've probably said before, the school now goes with inviting ex-pupils who have achieved success in a particular field - it's all about the encouragement of aspiration (which is the good face of ambition).  Lorna is a delightful girl and is doing impressively well in her field of media and marketing, and spoke well and entertainingly.

I was competent.  That's what I'm there for, I'm not the main event but have to do a recap from the governors' point of view and be appreciative.  A few encouraging words are fine, but I need not to draw attention to myself, whilst not actually sending people to sleep.  There's been a lot happening this past year and I couldn't seem to get my speech under 925 words, which I timed at 5 minutes, 15 seconds.  When it came to it, we were in the Sports Hall and the acoustics aren't marvellous, so I had to wait a bit for the sound to catch up, so it may well have taken nearer 6 minutes.  Longer than I'd wish, but no great problem.  No, I wasn't nervous, I had a bit of a flutter about an hour before, but that's not out of the ordinary, and I actually don't mind speaking to a few hundred people.  Being short-sighted is an advantage there, I think.

I've been looking through the list of former guest speakers.  Back in 1974, we had John Ebdon.  My favourite broadcaster ever, hooray.  The next year was Margaret Thatcher.  Let's not get into politics please, I bet she was inspirational.  Hammond Innes, Sue Ryder, Viscount Tonypandy - someone had some influence, to get that calibre of speaker.  I remember Martin Bell, he was excellent, in his white suit. Louis de B. didn't give a speech but read a short story, which was entertaining.

I have just remembered that photo of Gus as The Fonz.  Heeeyyyyy. 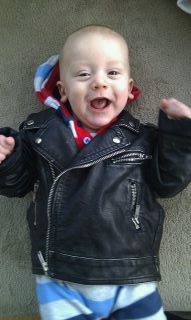 And if you have been, thanks for listening.

Oh, wow, what a jacket. He truly is the Fonz.

Cheers! I really do love the photo, sugar! He's absolutely too adorable in that pic - a truly happy baby! xoxoxo

Viscount Tonypandy - one of the best Speakers ever. He would have wept to hear the current one.

Brilliant, isn't it. And my pleasure, Sav. Thank you too.

Blimey, you're right, Rog - in both respects.

Mind you, Speakers seem to have fallen by the wayside of late, when you think of the last one too, who didn't seem to command a lot of respect. When you think of George Thomas and Betty Boothroyd against the 21st century contingent, makes you despair.

Gus is cute! And I really want one of those jackets.
Sx

Clever photo. He looks as if he's standing up and dancing the twist. I must show Ann this one. She'll drool!!!!!!!

I know, isn't it great? The jacket is pleather, not the real thing, and was passed down from Weeza's boss's son. Weeza says it's really warm, and Gus looks as though he likes wearing it. I think I'm going to buy him a guitar for his third birthday. Not full size, obv. I think that Zerlina will be a drummer.

And you are right, being short-sighted helps with speeches, concerts and in court.

He's always smiling, Mago. His big sister was the smiliest baby I'd ever come across, he's just the same.