It was not the childhood memories that upset me most the other day.  It was the newspaper cuttings.  And here they are - they enlarge quite readably - and you'll see what I mean. 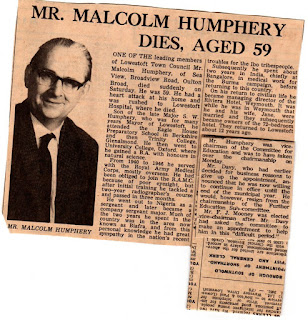 I've been thinking about my father a lot recently, as it happens, triggered by a photo of my baby grandson Hadrian, in whom I recognised my father's smile and eyes.  And then this ... the second article was written by a reporter called G**rge Sm*11m*n - I saw him again as it happens, about three years ago at a Hindu wedding I went to in Lowestoft.  I recognised him immediately and we had a lovely chat.  You can see the shock and feeling of loss that went into the article, but it isn't exaggerated, you know.  It's true.

What I have felt a keen sense of loss for, during the past 42 (nearly) years is not the person described, of course, but the father I knew and loved, and what I've so regretted is that I didn't have the opportunity to reach maturity and get to know him as a person as well as my daddy.  But reading these and other newspaper clippings, I've realised that I've spent much of my life, in particular the last 23 years, unknowingly trying to model myself on him.  I've always wondered, and increasingly so of late, why I have such a huge sense of duty, why I have to feel that I'm contributing to *the community* (whatever that means) and why I feel that it is, outside my family, my purpose in life.

I'm not so unusual in that, of course, I know plenty of others, and many people do far more than I.  Nor am I suggesting that it is because my father died relatively young that I have turned in that direction.  I don't feel I am proving myself to his memory or anything like that.  I said that the past shapes you, but to be shaped is not necessarily to be scarred.  I'd probably have gone in much the same way, whatever happened.  However, I do feel I've learned something about myself in the last couple of days.  And, although I was terribly upset when reading all the tributes, the account of his funeral and memorial service and so on, I hope I'm going to find it a comfort as time goes on.  So much love and respect.  But such a loss.  One never really gets over it, you know.

So good to meet you! Thanks for the visit.

Whilst I very much believe in looking forward, there is no denying that we are shaped by our past. I am fascinated by history and I spend an awful lot of time on the Ancestry website looking for my ancestors. I was disproportionately thrilled to discover that I have ancestors from Suffolk, particularly when Sir B and I found the grave of my great great great great grandfather at Thornham Magna last year. I KNEW I was East Anglian!

You're right about loss; you don't get over it you just get used to it.

From what I can tell you've done an admirable job of following in your father's footsteps. He would have been proud of you.

Oh, btw, when tidying up today I think I've found my family history folder. I'm looking forward to seeing what's in there. Haven't seen it for years, did most of the research in the early '80s when I was working at Bush House in London so could look at Birth, Marriage, Deaths records in my lunchbreak. Can't look yet though as my tidying up has reached the furthest stretches of everything out and all over the place.

Zoe, your father would undoubtedly be very proud of what you have accomplished and the person you have grown up to be.
I also lost my father too early, you never get over it. A lifetime goal is to be as respected and loved as he was.

One day they will discover a gene for public service and public spiritedness. It's a shame that more people don't possess it...

And, it seems that AQ and I were researching family history at the same time.

I found this very moving, and it resonated.

He'd be proud of me and Wink, whatever we'd done. Thanks, darlings.

What a very lovely smile.

It is so true that you don't get over it, just get used to it. My father died 24 years ago and I still miss him. And I am so sorry that my children lost their father so young. I think your father would have been proud of you.

Your last few posts have been so thoughtful and thought provoking. Your photos are charming. I, like your other commentors, would be much happier if I didn't torment myself with the past.

Thank you again. Can't change anything in the past, of course, we just try not to make the same mistakes next time.

If anyone family's situation was worse than ours, it was yours, Alienne.