Weeza doesn't know quite how I manage it.  Zerlina always sleeps for a long time here.  Laast night, having gone to bed at 6, she woke briefly for a drink and a visit to the bathroom about 9.30 and then slept right through until after 8 this morning.  I'd been awake for hours as usual and too lazy and tired to get up, which isn't unusual, so I called to say hello and then we both stayed put for a while longer.

We decorated tge the tree later.  I wrapped presents last night.  This had sunk me into a state of mild gloom.  I don't like doing that until I'm ready - ie, until I've bought all the presents.  I nearly have, but there's a notable Gus-shaped exception and I also haven't bought anything much for Ro.  He and Dora live in a tiny place and he hasn't room fr anything more.  Once they move to a house, he says dreamily, he'll need lots of things, and for the garden too...I've a feeling he's building up to buy, don't you think?  Anyway, a few other gaps under the tree, so I'm going to have a final visit to Norwich tomorrow.  A first and last visit, that is, Norwich shops can't depend on me to stay in business, sad to say.

I did feel oddly jagged, though, earlier in the day.  Hard to think of a reason, decorating a small Christmas tree can't have done it really, whatever I said in the last paragraph.  In fact, my lack of enthusiasm was probably as a result of my mood rather than the cause of it.  The local theatre's pantomime has brought me out of it, however.  Sitting in the back row and no one in front of me, there was nowhere to hide and we joined in with enthusiasm, once Zerlina had stopped being frightened of Abanazar.   I've just had a text from Dilly saying her two had enjoyed it so much they want to go again.  Anyway, I've sung, clapped, shouted 'it's behind you" and so on, and am now gently dribbling ginger tea down my front - which was a bit of an accident, it was hotter than I thought it was going to be. Still, better than over the keyboard.

A friend of ours who works in Aberdeen sends pictures of the scenery once in a while.  This is today's - what he saw when out walking yesterday.  Almost makes up for living in Aberdeen, I suppose - not that I've ever visited the place, but he misses East Angular.  I've added it to the desktop photo folder, which puts up one of around 250 every 15 minutes.  I have a low boredom threshold and don't care to look at the same picture for long.  Well, not unless it's someone really appealing, obv.

(It occurred to me that I hadn't asked him, so have taken the picture down.  Sorry) 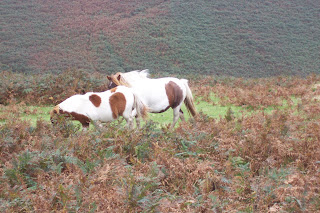 Coincidentally, this one just popped up on the desktop, taken by me on Dartmoor a few years ago.  The car behind me stopped too (not as a result of my abrupt halt, darlings, I did pull properly off the road), but only I had a camera to hand and was able to snap them before they disappeared.  No merit to the photo, and I suppose if you live in the area you see them constantly, but we rarely see any wild mammal bigger than a hedgehog here, so it pleased me. 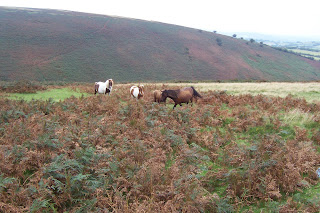 We seem to have a fair amount of deer here, and the odd hare- more, I think than a few years ago. I watched a couple of jack hare sparring last spring, and I haven't seen that in a good many years.

There are deer, but we normally only see the muntjac and they don't really count, being escapees from wildlife parks. The odd fox, usually run over.

I was thrilled, LX.

Er, sorry I'm only an old lady (oops, shouldn't say that - only a month older than you, actually less than that) - what are you meaning by this HDWK? I don't know anything - and this has been proven, many times, by my children.

And, yeah, there are deer at Ashton Court, but I can't be ***** to go and look at them 'cos they only run away if you get too near, and they all look the same anyway.

If I happen to go to bed early, I wake up during the night for a drink and the bathroom just as Zerlina did , then go back to sleep and I might wake up very late in the morning despite the alarm clock - which is undesirable.
So, I try not to have an "early night".

And they're not too keen on the balloons either, or all you stupid people that come down here at six in the morning to look at them. Still, at least it only happens once a year.

What a huge nature your friend lives in. This world is wider than I imagine.Thank you for sharing these photos and your honest feeling.

AQ, darling, we're a pair of old dears. Sorry, I was referring to How Do We Know, who commented above you, as HDWK.

A friend of mine, years ago, was thrilled to find fallow deer visiting his farm. Someone said "don't they damage the crops?" He said 'yes - but I've got fallow deer on my farm!" Nice man. No longer a farmer, mind you.

If I go to bed early, I tend to spend several hours awake in the night, Duta. Mind you, I'm doing that at present now anyway.

Aberdeen is the very north of the Scottish mainland, Haricot, and he sends pictures of beautiful landscapes with lakes, mountains and snow. And, thank you. The intention is to describe, not to moan, so I mentioned it after I felt better!

A few years ago we might expect to see foxes, the odd badger, lots of hedgehogs and enough rats to cook for a whole siege. Now all we see is muntjac! It's a poor exchange. Even bunnies are a bit sparse.
Love your ponies. They take me back to childhood days, riding on Dartmoor.

Sorry, Z, whenever I see a bunch of initials I expect them to be some new phrase that I haven't caught up with yet.

We do have rats, not that we see them often. But there are a lot of waterways around here. There's a lot of small wildlife - a few years ago, there was a bad infestation of mink and they killed nearly everything, but they have been brought under control. Also plenty of bunnies, although we had a fox in the field a few weeks ago.

I have no objection to eating muntjac, John. But I couldn't bring myself to shoot one, so I won't get the chance.

I know what you mean, AQ. No probs.

I've been to Aberdeen and never saw such a majestic sight. Reminds me of that scene in the movie The Queen.
Would send Pesto the Wonder Cat over to help with the rats, but she also likes to chew electrical cords.