Christmas Eve. Or possibly Elf. If not, Pearl

The Sage left for Yagnub, to go and wish various shopkeepers a happy Christmas, and to pick up the local paper that I'd accidentally left at the greengrocer's.  A couple of minutes later, he was back again.  "You won't believe this," he started (I believe anything and everything where the Sage is concerned), "but I found a chicken wandering around in the road."  He was indeed holding a large chicken.  He said that her crop was empty and he could feel her breastbone sharply, she was thin and hungry.  She's very tame, however and I found a large box - well, that wasn't hard, I'd just emptied it of wine bottles in the kitchen - and then gave her a cuddle while the Sage fetched her food and water.  She wouldn't feed from his hand, but started eating as soon as she was put in the box.  Here she is, doing just that. 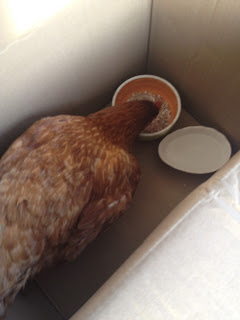 We'll keep her indoors for a few days while she regains strength, and put the word about that we have her in case her owners get in touch.  If not, she has found a new home.  She can have the run of the porch for now.

Squiffany suggests that she be called Elf.  The Sage wants to call her Pearl, it being the second name of his friend Frances (her husband and son run Big Pinkie's farm).  I think that Christmas Eve is too obvious a name to pass up.  But actually, I don't really name chickens.  I barely remember the names of my own family, calling every chicken by name - hell, choosing a name for each of them and remembering which one is which - is way beyond me.

In other news ... I trotted round the village calling on elderly friends in a Christmas cheer sort of way, and then I went to the Carol Service (if we find another hen tomorrow, I suppose that will be her name) where I swayed gently to the music as I played, as I realised part-way through.  How undisciplined of me.  I've not done a lot else today.

So, darlings, have a lovely Christmas, however you spend it.  I love and appreciate you all very much.  I feel great warmth from this blog, and I hope you will all be happy.
Posted by Z at 11:35 pm

Happy Christmas to you and yours.

Happy Christmas Z, hope you and yours have a lovely time - and Elf too.

Happy Christmas, sugarplum!!! all the best to you and yours! xoxoxox

Why did the chicken cross the road?

The chicken story is great. Hope your Christmas is beautiful.

The chickens are coming home to roost????
No... in too much of a rush to get my presents back to make a witty joke.
Merry Christmas Z!

Happy Christmas to you my darling and to The Sage.

I think Elf has found Chicken Heaven...otherwise known as your house. She'll love it, living with you.

Lots of love to you. xxxx