Bringing on the wall, Day 50 - whoops, no pictures

Sorry, darlings, I was out until after 5.30 and I slumped with a glass of beer.  Because I only had enough wine for a single glass and that just wasn't going to cut it.  By the time I realised I hadn't taken the photos today, it was getting dark, so I'll have to do it another day.  Not tomorrow, I'll be out from 7.30 am until 9.30 or so in the evening.  Out most of Friday too, so I'm making no promises before the weekend.

However, I can give a verbal report - I had to get ready for my meeting this afternoon, so I only worked for just over an hour.  But it was enough to add a row of bricks, the penultimate row, on one side of the pillar.  Meanwhile, Dave finished off the central pillar.  He didn't add the cap, as it's quite heavy and he wants the mortar to be set firm on the pillar.  On the other side of the pillar, there are two courses of bricks still to go - but that's only one morning's worth of work.  We are actually within three days of finishing, we believe.

Whether all three of those days will happen this year is another matter.  We'd like to finish the brickwork, but if the weather turns, this may be it.  Last year, we did carry on until the 26th October and were abruptly halted by Dave's illness, although it was getting jolly cold by then.  We shall see.  I've got two or three days free next week if the weather's fine, don't know about the Sage.

In any case, we will have a party next year - May or June suit you?  You are all genuinely and cordially invited and we'll pick a Saturday to suit as many as possible, if you let me know....no darlings, not yet.  Far too soon, the eggs aren't laid yet, let alone hatched.

It does look brilliant.  I'm so pleased with it.  The only thing for which I regret the thought of finishing is that Dave won't come and see us unless we give him a job to do.  He points out that a social call doesn't suit his workaholic ethos.  We could, of course, find a lot more jobs - there's a toolshed to be built, a boathouse to be demolished and reconstructed, a summerhouse to renovate - but no more bricklaying.

Still, we're not there yet.  Still a few days of fun to come. 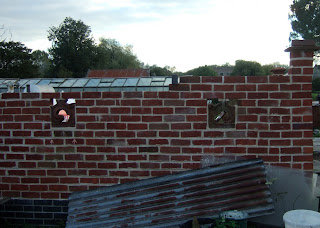 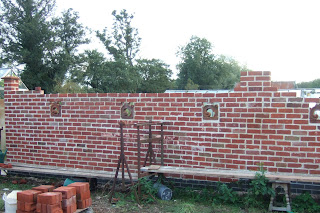 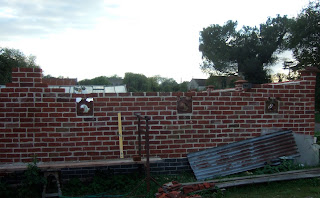 If you think that third photo is crooked, it's not that - the ground is sloping and, because the right side of the wall is at the full height of bricks and the left isn't, it gives the impression of being on the huh.  I took the next three photos at my eye level, from the leftmost brick to the rightmost, and then one of the ones on the wall at right angles to this one.  All level along the top. 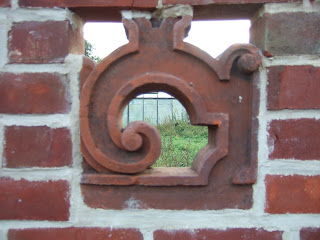 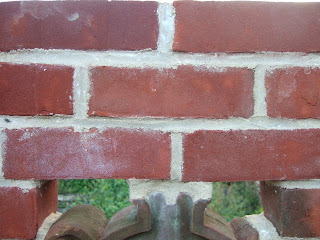 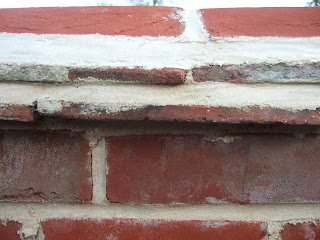 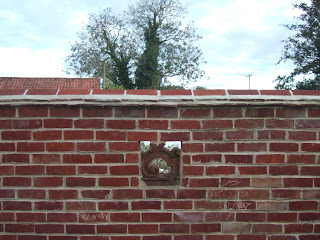 The final one, I just stepped back a few paces.
Posted by Z at 9:53 pm

You certainly deserve to take a deep breath and to put your feet up! I will patiently wait until at least this weekend (not a day sooner, you hear?) to see your wonderful brick wall! Take care of yourself, Z

Thank you, DD - having got all that paperwork off is a load off my mind and I'm having a day out tomorrow in Kings Lynn, getting back in time to go out for dinner with friends near Norwich. And once the weekend is over, I actually think I've got an easy week to come. As long as Ofsted doesn't come, of course, which is still not unlikely.

I bet you're very pleased with the progress. I've got the dress and the shoes I'm just waiting for the date and time and I'll be there. Though I confess, I'd love to see you before then...oh my. Did I just drop a hint? Please don't trip on it.

I said four days to the Sage, to be on the safe side, as those tiles are quite twisted, so laying them flat takes quite a long time, and I do want to get the top level - no point spoiling the final look in a rush just to finish, is there?

Great progress. Well done. And a party! If you make enough noise clinking glasses and singing I might hear it from here.

I can't wait to see it in actuality. But, sorry, I don't do dresses.

Please send Dave over. I have lots of jobs, and Mr BW just doesn't have enough time to do them all.

Dave, you are stalwart. Maybe we should build a brick greenhouse and a brick henhouse while we're at it.

Roses, I'd love to see you too. Do you work full time now? I'm busy or away for the next three weekends, but freer after that, and after tomorrow weekdays should have more possibilities too.

Dave, once we're on to the tiles, it'll probably be up to you anyway. Unless you have me following on with the top capping job.

Chris, don't suppose you're planning a visit next early summer in this direction, are you?

Strictly bricklaying, it seems, BW - although Dave is a master at all other trades too, I suspect. And dresses are by no means mandatory. I hope you and Mr BW will come.

Well, do you know, there's a possibility - the choir's going on tour in Scotland next May, and there just might be a chance before or after, who knows?

Our auction is the first Friday in May (I think) and otherwise I can fit it around your plans. Fingers crossed.

What an amazing accomplishment. Thanks for allowing me to observe the process. Just like being there but, none of the work.