Dave fitted the last two ornamental bricks this morning, and we built the whole row above too, except for a few bricks that are part of the pillar.  Rather than work on that, we decided to leave it until Wednesday.  Remarkably, we've almost finished the bricks.  Just two more rows - the last three sessions have achieved more than I expected.  After that, there are the tiles and the capping bricks to add - the tiles are there to deflect rainwater from running down the brickwork.  They are the original tiles that used to be on this house.  We replaced them, with new hand-made tiles from a manufactory in Sussex, 25 years ago.  The Sage went down to fetch them in a borrowed lorry, and stopped off on the way at an auction to buy a cat - a china cat.

Weeza, Phil and Zerlina came over in the morning to make a fuss of Tilly.  She was glad to see them and wanted to be with us - she rested for some time in her basket, which Weeza brought outside into the sunshine.  However, Weeza could see the difference in her, after only a few days, and agreed that there wasn't any good news to come.  Later. "I'm on Tilly's sofa!" said Zerlina ... she's too little to understand, we'll have to fob her off until she forgets.

Zerlina laid a brick "put the bird poo here" said her mother, possibly unwisely - is it a good idea, to give the notion that guano is okay to handle and a useful building material?  - anyway, she slapped it in place, helped put down the brick and then banged the hammer to tap it into place.  Then, Weeza took over from me, so I went to cook lunch. 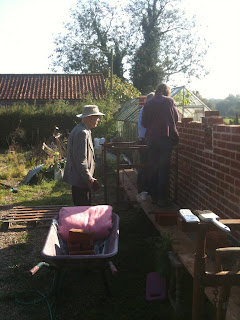 Lunch was slightly odd, admittedly, with a random assortment of food I happened to have.  No one but me fancied the beetroot in yoghurt sauce, but the baked beans and sausages went down well.  The grilled pork belly slices, we finished off tonight with yesterday's chicken casserole.

So, here are pictures.  I am really thrilled that we've got this far this quickly, over the last week and a half.  The wall looks lovely and I'm proud of it. 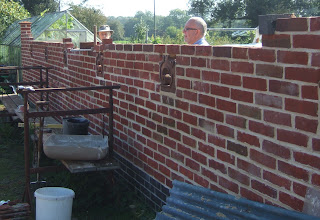 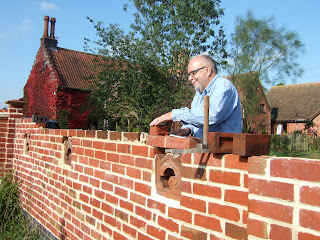 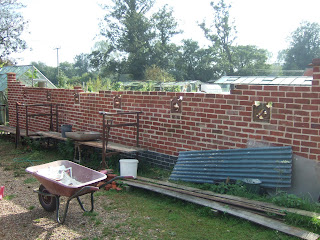 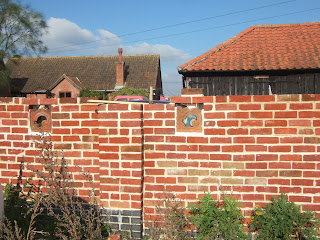 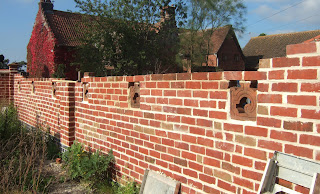 The Virginia creeper on the end of the house is beautiful at this time of the year, until we get a strong wind, when all we're left with is stalks on the house and leaves blowing in the door.

Tilly couldn't eat all day and was uncomfortable.  Not in pain, but not getting much rest. We arranged for the vet to come and help her out of it and she died quietly as I held her.  I don't have to tell you how much we miss her, and thank you for your kind messages.
Posted by Z at 10:04 pm

So sorry: I'm glad I met her. She was a very sweet dog. But, she had lovely weather for her last couple of days.

I am so sorry...big hugs from across the pond.

You know all this, like "the circle of life", and "living on in others", variations of "werde und vergehe" ... and there's always the personality, the in-dividual, das eben nicht Teilbare. And its missed. It's not "a" dog, but this one.
I am sorry.

I am so sorry.

The wall has really come on in leaps and bounds. Good job.

Many hugs to you on what must feel like a strange day.

Warmest thoughts. So very sad for you. I'm sure you couldn't have given her a better or richer life. Maybe the wall could be a sort of memorial to her.

She really was a little friend of all the world - such a big loving heart in a dear little body - too upset to say more.

Tilly I'm waiting for a run on this beach with you.

Well, bugger. That's got me crying.

Doing some catch-up reading - I'm a little behind (as always).

So sorry to hear about Tilly, I'm sure you must miss her.

I'm so sorry Tilly has died. How nice though that the vet came to the house and spared Tilly the trauma of a trip to the vet.