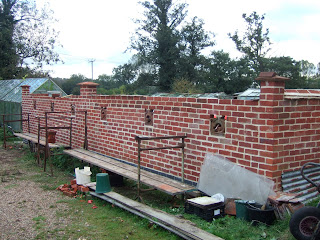 And just the one picture. You'll observe that Dave put the final capping on the pillar and finished the brick on its right side, and I got within a few bricks of finishing the other side before I had to leave. Dave tells me that they paused for lunch, whereupon the Sage consulted him on the cooking of a ready-made pizza - "Is it ready?" "You see those black bits at the edge? - It's ready". Afterwards, because there was still some mortar left, Dave carried on for an extra hour. 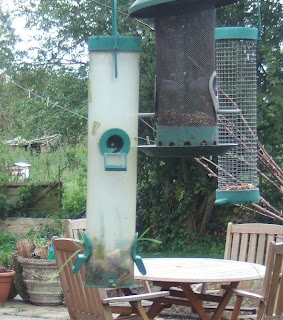 We harvested the squashes in the afternoon and then I went with Al into his garden.  He pointed out to the children that the bird feeders need filling.  Apparently, the birds poke grass stalks into the feeder in an apparent attempt to pull out the last few seeds.  That was news to me.

Today's work later, the internets is so slow today that it's taken me half an hour to write this and load two photos and I've no more time - off next door to babysit.  I'll be back later, I'm hoping to swap places with the Sage for a bit as I've got work to do here.
Posted by Z at 6:20 pm

You mean there's another way of knowing when pizza is ready? Really? Hmmmm...

*changes her mind about the dress for the Great Wall Party*

It always works for me.

The party will be next year, whatever happens. Your summer dress will be fine, Roses.

Likewise, we're alerted to the readiness of my toasted cheese by the aroma of burning toast, aren't we, Dave?