That magnificent man in his flying machine...

Today, we went to visit a Bond celebrity - the autogyro out of You Only Live Twice. And its inventor and pilot. He is now 94 years old and still flying. He's the life-president of the Sage's classic car club and always invites members and their guests over every year. He's a brilliant inventor and you are welcome to poke around his workshop and see all the autogyros and he loves to share his years of knowledge and experience. The Sage has been at least four times and this was my third visit. We took our friend J, who helped us when we were blocked in by the fallen tree, and M, another friend who is a mechanic with a particular enthusiasm for restoring vintage cars. 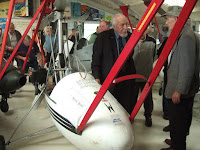 Here is Ken Wallis, talking to the Sage. 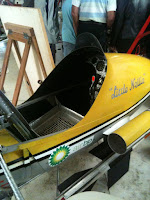 And here's Little Nellie herself.  In the film, it was Ken Wallis flying her.  It was adapted from an autogyro in military service - they have been very useful in a lot of surveying and other situations, though I suppose they're somewhat superseded now.  He built the first one in 1961. 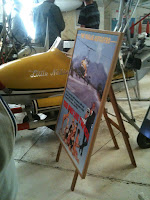 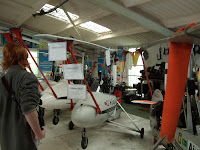 (Blogger has really messed up photos recently by the way, and it doesn't seem to be possible to put them side by side any more, which had been a useful recent innovation.  They don't go where I want them to either, so are out of order.  Sorry - it's late and I'm not shifting around the order of the html now.) 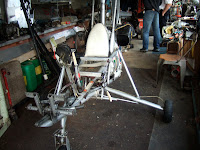 One of the biggest treats is seeing the autogyro fly. He has to get his licence renewed in America, as he's deemed too old in this country.  This is the one he usually takes out, but it overturned last week - a wheel strayed into the long grass as he was on the way back to the barn and it fell over, smashing the rotor arms.  He had some grazes on the back of his hand, but was quite dismissive of them.

The one he was flying instead was much larger and heavier, with a sizeable Rolls Royce engine. 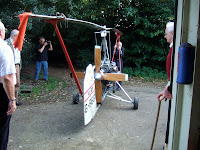 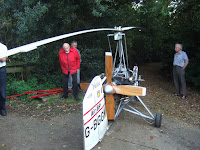 He pulls it outside, then removes the stays that keep the rotors from swinging around.  Then he primes the engine and swings the propellor and then gets on and straps himself in, and sets off towards the field.

His usual party trick is a "look no hands, look no feet" flypast, but that wasn't so easy with this larger machine; still, he showed its paces impressively and it was fun to watch.  I've a couple of short filmed clips too, to finish with. 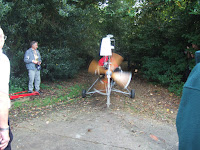 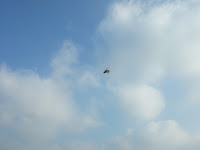 Chris kindly found an article to link to - here - do click on it, it's an excellent article that really gives the way he speaks, and there's a film clip at the end too, which is worth watching.
Posted by Z at 11:22 pm

94? 94 years old and piloting a gyrocopter? Incredible. To think that I'm worried about my 74 year old mother driving her Sherman tank aka station wagon.

Didn't he let you have a go?

Your friend is a thumping good example to all of us. Moral:- somewhere between 'never give up' and 'bash on regardless'.
Cheers, Mike.

Amazing! Would you have had a go if you'd been asked?

Sorry - shan't be a moment - there's a good 'no hands' (and no feet) photo, and more about this extraordinary man here:

He used to take up a passenger, but he can't get insurance for that now.

He doesn't seem to age - I've known him for years (in this context, not as a personal friend) and he's just the same! We said to him yesterday, was his granddaughter at school with our daughter and it was agreed that she was - "I'll remember Weeza too her," he said, and we have no doubt that he will.

Do pop back, folks, and read/watch Chris's link. It's really good.

I have shown this to M. DeFarge. He is now beside himself with excitement, as he has a little thing about the gyrocopter (the Rolls Royce engine helps...). Wonderful link.

It's as great as it sounds, Madame D.

What an amazing man!

So vibrant, it does a body good to meet him!