Bringing on the wall, Day 48 - keeping to positive thoughts

Dave arrived on time this morning, but the Sage and I were running a little late.  The Sage had gone to fetch mushrooms for Tim (a job he always did for Al and still does for Tim - it's the same farm as the wholesaler gets them from, but they are fresher, not having been to Norwich and sent out again the next day - and cost more money.  I had found that there was a document that needed to be emailed out, and my connection was very poor and it took ages.  Anyway, we made a start before too long. 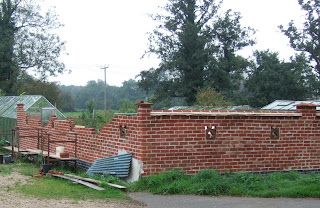 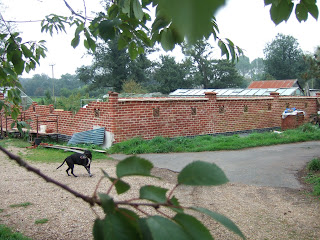 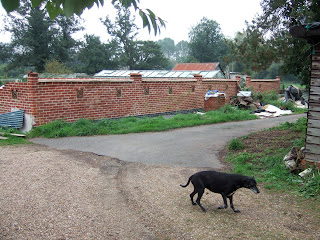 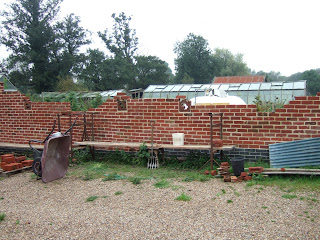 Dave put in two more of the special bricks, which leaves two more to go and, weather permitting, they will go in on Monday.  We're not thinking too much about finishing - it depends on the weather and how much time the Sage and I have free.  If the next fortnight is dry, it isn't out of the question.  Once we're up to the level of the top of the ornamental bricks all along, it will give a visual effect of a completed wall - it's surprising, the difference that a couple of days' work has made. 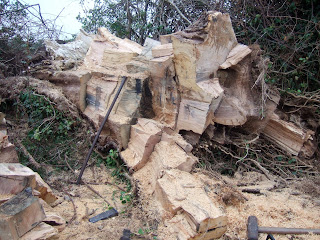 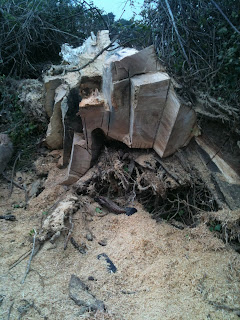 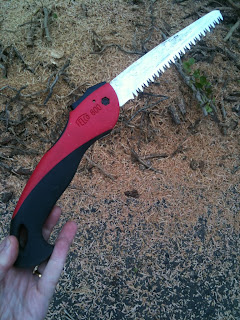 Afterwards, we had another session cutting up the oak tree.  Still a way to go.  And all that wood has to be shifted and then split.

As you see, Tilly was pottering about when I was taking the pictures.   The vet phoned this evening - the blood test report was inconclusive.  Some muscle damage was indicated, which could mean a lot of injections or blood tests, which she hasn't had, or a lot of lying around, which is more likely - she used to be an active little dog, but sleeps a lot more now.  And her pancreas isn't in good shape, though they're not sure why.  Another test could be done if it seems worth it and we're leaving it until after the weekend and the vet, who is a lovely Irish girl called Niamh, will ring again.   I'm not very hopeful actually, though I realise I tend to look on the gloomy side.  Let's not think about it for a day or two, hey?
Posted by Z at 8:33 pm

it's always hard when a pet is ill, after all they are part of the family

Why is it more expensive to buy the mushrooms direct, rather than from the wholesaler?

So sorry to hear Tilly is so poorly. My gran used to say 'old age is a terrible thing'. I'll keep my fingers crossed, it's just a blip and you'll have more time with her.

Good to see the wall is coming on a-pace. I've got the perfect dress for the Wall Party - light, floaty and with pink flowers.

Dave, love, you know what I mean.

Thanks, Helen and Roses, but I'm afraid she has stopped eating.

Whether the wall does get finished this month or not - odds are still against - the party will certainly be next year, so a floaty dress will be ideal. For you, that is, I doubt Dave will wear one.

So sorry about Tilly. Not easy for you or for her. Maybe Niamh (Irish Gaelic for 'saint', isn't it?) will wave a magic wand.

And who could doubt that you did most of the work on that oak with that mighty saw?

She's still accepting her dog-treats, and comes hopefully to her bowl, but then turns away. She ate a couple of mouthfuls of chicken this morning. She's quite cheerful and lively and in no pain that I can tell, but I don't think this will last.

Indeed - wedge and sledgehammer were used to finish the splitting, of course.

Helen, I've been meaning to ask you for your new blog address, sorry I've been dilatory. Could you email it to me please? - either the one on my profile or *my first and second names* @gmail.com

The wall looks so fabulous.

So sorry Tilly is not well.