Bringing on the wall, Day 47 - Dave reaches the top

You know I said that the vet says Tilly's teeth aren't in good shape?  They feel pretty sharp when your fingers are caught in between them.  She really doesn't like those tablets and, most unusually for a polite and gentle little dog, clamped her mouth shut when trying to avoid swallowing them.  Unfortunately, my hand was in the way.  Still, no harm done, and now I know better than to do them one by one.  I open her mouth with one hand and, with the other, shove all pills to the back of her throat until she swallows.  Kinder, as that way she doesn't get the taste. 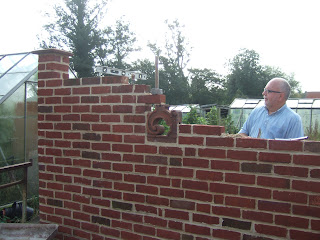 Dave started by building the end pillar to the top, and then carried on for another few rows, just to get the sense of a job done - now all we have to do is fill in between.  The final tiles and capping bricks will have to go on right at the end of the job, but the pillar is complete.

In the meantime, I was working on the central pillar, up to where the next ornamental brick will go.  They are four ordinary bricks high, so that's as high as I went. 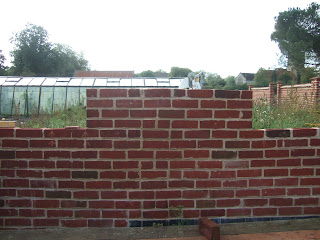 After that, we both did some filling in.  The forecast is good, so we're planning another session tomorrow morning. 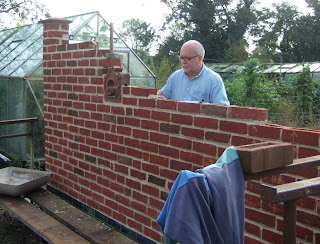 Weeza and Zerlina came over for the day.  As the weather was so lovely, we spent most of it outdoors.  In the afternoon, we did more work on the fallen oak tree - more than half gone now, but it's a big job.  When Squiffany and Pugsley got home from school, Al took the children to pick some blackberries and the girls came back with berry-stained faces and hands. 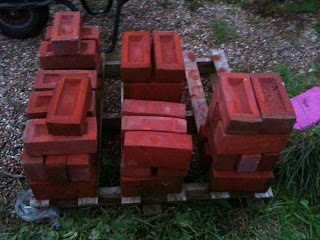 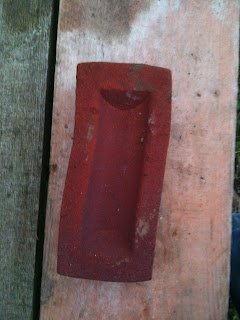 After that, the Sage and I fetched bricks for tomorrow, opening the last pallet.  It was 6.30 when I took this photo on my phone, so it's rather dark. And here's one of the bricks, so you can see why the wall isn't quite as straight as it might be.
Posted by Z at 11:23 pm

It's certainly been laborious. But rather more enjoyable than those of Hercules, I would say.

That's right, Ad - we're getting down to the serious stuff now.

If Tilly has to take pills for an extended time, there are pill pockets (basically hollowed out treats) that can be a little less stressful.

Are you able to assure us that the wall will be large enough to prevent his escaping?

It's really coming on.

No wonder your wall is on the 'huh', with bricks that skew-wiff.

I'll have to start looking for an appropriate dress for the Wall Party. Good stuff.

As far as we can tell, the wall won't be finished this year, Roses, so the party will be next summer. Something light and floaty then.

The bent mis-shapenness adds to the quirky appeal.

I think that probably applies to the wall as well.

Thanks, Marion - I haven't been trying to hide the pills as they are quite large and she's chewing everything very thoroughly at present. To have a chance of disguising them, it would mean breaking into 8 quarters, twice a day - frankly, shoving them into her is less trouble for both of us.

Vicus, Dave doesn't yet quite realise that the tool shed will actually be his future home. He will be an ideal vegetable gardener as there will be no likelihood of his eating the produce he grows. We won't tell him yet though, okay?

It takes a while to find the perfect dress, Dave. Just as well if Roses starts looking now.

Well put, Rog. Dave's quirkiness is only part of his appeal, of course. I draw a veil over the bendy part (advisedly).