I said, yesterday, that I was due for an anti-tetanus booster, and Blue Witch kindly commented that, as far as she knew, one only needs two adult boosters on top of the childhood vaccinations to have protection for life.  So I rang to confirm that and it is indeed true.  Further vaccinations will do no harm but are not necessary.

Tetanus is such a strong infection that contracting it does not give you immunity, but the vaccine, after five doses, does, for life.  So next time I get a splinter from elderly dead wood or rub earth in a wound, that's one thing less to worry about.

Thanks, BW - and in return, I've been doing some experimentation on touchscreens.  It's not the coldness of one's fingers that is the problem, it's dryness.  Cold and dry often go together, of course, but using moisturiser or simply slightly wetting a fingertip solves the problem.

Several times, recently, the Sage has come to me, anxiously asking for help with his laptop.  In each case, it's actually been a flat battery.  Today, it wouldn't come on, again.  It was plugged in and all the connections seemed okay - but I was cooking dinner, so I didn't have time to do anything then.  Later, when he was busy with a long phone call, I took the computer, plugged it in again and wiggled the lead - and it started to charge.  If only all problems could be solved that easily, but he does now think I'm a whizz at problem solving.  It is a faulty lead though, he'll probably have to get a new one at some time.

Photos now - yesterday, or possibly the day before, there was a fine rainbow, which I could see from my desk here. 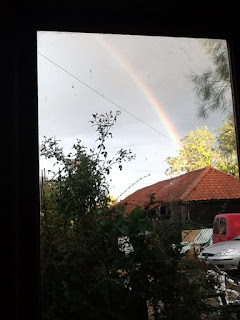 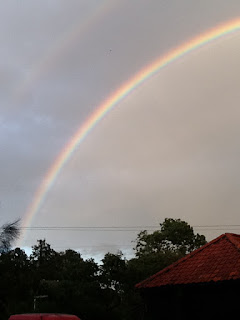 The first photo was my view from here, but when I went outside, it had become a double rainbow.  Not good photos because I couldn't get far enough back to see the whole arc, but a rainbow is always a pleasure, isn't it?

And today, I visited Weeza, Zerlina and Augustus. 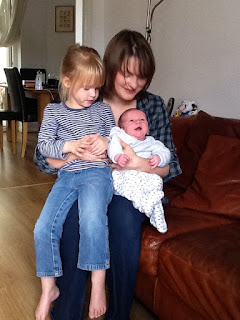 Who are all very well.  I'm going to go over on Tuesday next week so that Weeza can do some cooking to fill the freezer.  They've nearly finished the dishes that she froze while she was pregnant, and it does help, not to have to cook from scratch every day.  They have finally chosen a middle name for Gus.  Very charmingly, they are calling him after my stepfather.  "One of the family has finally chosen a family name - and he isn't even a blood relation!" said Weeza.  I said that he and Grandma would have been thrilled, and I am too.  He was a dear man and loved being my children's grandfather.

Next Wednesday, I'm going to London for an appointment at the Islington flats.  Wink may be able to come up to meet me for lunch, and I've also emailed my friend Lynn (the poet, whose book launch I wrote about a few months ago) to see if she's free when she's finished work.
Posted by Z at 9:42 pm

I've done a few rainbows. Actually, they're all the same, you never get to the end of them (or over them, sometimes).

I'm embarrassed at how often I seem to be 'first'. Hope you don't mind.

I think of you as a problem solver, Z.
I did not know about the tetanus, good to learn that the next splinter will not bring me into an early grave.
BTW I do not like touch screens, be it on ATMs or in cars (navigation or "media center", I'd be happy if the radio would work!), I alwas feel the need to spray some alcohol over them, what would seriously damage the surfaces of course.
I never came to the end of the rainbow, where this pot of gold should be found - ha, Regenogenschuesselchen ...

Did you ever see the video on t.v. of the little girl phoning her grandma and leaving a message that there was a rainbow that ended near the grandma's house? Little girl was all breathless and told her grandma to be sure and go look, there probably was a pot of gold in her yard.
You always have been a problem solver Z.

I suspect the tentanus thing is more about saving the NHS money than about anyting else - if you go to hospital with a wound they still give you a booster, irrespective of what you've had in the past.

When I wrote about touchscreens a few months back, a commenter gave me a good link that explained all the different types. Different types have different problems. One of the things I hate about them is the fact that they are always covered in nasty smeary fingerprints. *shudders*

I refuse to use the touchscreen to sign in at our surgery. First I know that it's been touched by people who are ill. Second it will put the receptionists out of work. Third, one of them is single and blonde, so it's far more pleasant to speak to her than thumping a touchscreen.

Like the rainbow pix. When I lived on Maui, there were rainbows all the time. Sometimes doubles. Always a sight to enjoy.

Tim, it's a pleasure to see you. I never tire of seeing a rainbow, it always makes me happy. Easily pleased, me. It especially makes me happy when I drive through a crop irrigation rainbow, which I suppose is the nearest to finding the end of one.

I checked three sites on the internet too, BW and they said the same thing. And at the surgery, they had their own records saying I'd had the immunisation 12 and 20 years ago there, whereas in hospital they wouldn't have that assurance.

I was thinking more of smartphones, iPods and so on than ATMs etc. However, I've no objection to using touchscreens anyway. Everything is covered with nasty smeary fingerprints, it's just that one can see them there.

All Zerlina's baby photos have her smiling, maybe Gus will be the same, AQ!

The way to solve a problem is often to look for the simplest and most obvious solution.

Thank you for a few minutes' smiling diversion, pics and all. Sometimes we have moonbows here, weird and mysterious phenomena, but I've never taken a photo of one yet.

I've never heard of them, Chris. Looked them up on Google images. Wonderful.

Hello Z. Had the same experience last Saturday. Coming home from Buckinghamshire chased a rainbow for about fifteen miles, before and after Lavenham. At its best it was a very big, high, double one, and impossible to get the whole thing on the camera screen. Love rainbows, I suppose everyone does, but not seen many this year.

Lovely pic of the family group. I'm still perturbed about you naming your daughter after an Asthma inhaler though. Or maybe other people don't have the same nomenclature as us...

She named herself, Rog. I used to call her El. None of us suffers from asthma though.

There have been three in the last few days, Mike. Always cheer me.