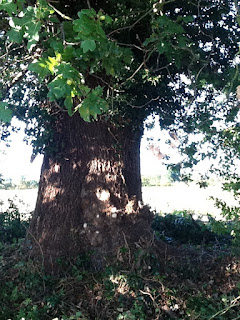 Over the years, the grass has crept over the edge of the drive - only by a few inches, but when we have it resurfaced, obviously we want to go back to its original width.  So this afternoon, Jamie started the boring job of scraping off  grass and earth to the edge of the tarmac.  He also cut through the ivy on the big oak tree on the drive.  It is normal to have ivy growing on trees of course, and a healthy tree isn't damaged by it, but the oak is probably 300 years old, or so the Sage thinks, and it needs all the help it can get.  The ivy growing on the trunk rather masked the full sight of the circumference, and the picture above still doesn't make it entirely apparent.  But its size may be more evident in this picture. 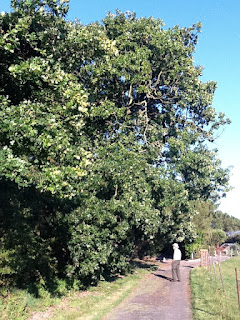 That is all one tree - half of it, of course, it is in the middle of a hawthorn hedge.  A branch has grown rather too far down and we'll have to trim it, it would be a pity if a delivery lorry tore it off.
Last year, the acorns were stunted and misshapen, I don't know what happened to them, but this year they are big and healthy.  There is one small seedling that we will try to keep, near the corner of the field where it will not be in the way, but usually they grow in completely unsuitable places. 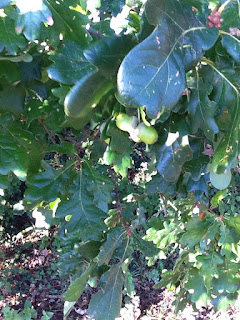 There used to be three oaks alongside the drive.  One died years ago, and it is that tree that fell over, blocking the drive, a year ago.  The second one has lost its major branches and is still healthy, but in its declining years.  I don't know how long this one has before it starts to diminish in strength, but it's magnificent now.
Posted by Z at 11:18 pm

Truly beautiful old tree. I'm glad you are so fond of it.

It's wonderful to have a truly grand old oak like yours. We have one too and it periodically drops branches on the lawn - just to keep us on our toes perhaps. We also have the unsuitable seedlings, endearingly small but ruthlessly uprooted except for one which sneakily turned into a full sized tree before we noticed it.

Is the Sage shrinking?

Sorry I haven't been a terribly regular visitor lately, but I've enjoyed catching up with news from the Zedery.

Yes, I think that to all appearances the Sage may need a daily dose of Radio Malt. You can probably distil it from acorns.

Until I had to keep stepping back and back to get it all in, I hadn't realised quite how huge it is. And I agree with you, Mig, oak seedlings are so cute.

The acorns were stunted and misshapen, Rog, not the Sage. Although I did look at him yesterday and think that he's lost a few pounds - his tum is decidedly flatter than mine nowadays.

I was going to email you, Chris, to ask if you were all right or simply busy.

The tree (and the sage) are in their prime.

Just so long as we don't produce any more little acorns...