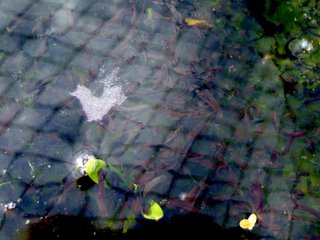 A surprise this morning – went out to the pond to admire the frogspawn and found that the tadpoles are hatching. Seething mass of wriggling darlings basking in the sun. Some years, if the mood takes me and I have time, I spend a day by the pond just watching tadpoles hatch, but I’ve missed most of the occasion this time. There are some surplus pond plants that I must remove as there won’t be enough clear water for them to swim in as they grow, and if I leave it a few weeks I will have to take ages frisking each chunk of plant for tadpoles, as well as snails etc. I’m a bit softhearted…….

When I was a child we had a big rock-garden; really it was huge, about ¼ of an acre. My grandfather had it constructed in the 1930s to help provide employment. There was a system of ponds and waterfalls and my favourite pond was well stocked with newts. I loved them dearly and spent hours watching them and catching them – I never used a net, it was a point of pride to use nothing but a swift hand. They were then kissed and examined and released again.

I still catch frogs if I can; not in the water as my reactions aren’t up to it (and besides, I’ve grown up) but if I move a log or something and there is a frog crouching, I pick it up and, um, give it a kiss (perhaps not grown up that far). People ask if I expect it to turn into a prince – ‘well, it’s only happened once so far ---‘, I reply brightly.

The postman brought me a parcel and I was quite excited. I couldn’t remember ordering anything but a surprise is Good. Not that good in this case however, just a new cartridge for the water filter, together with an invoice helpfully telling me that £26.79 has been taken from my bank account. Oh. Very useful.

I’ve put the photos on the computer, with a few I took at the weekend there are 300 of them. Blimey. Whatever does anyone want with 300 photos? And even the rubbish ones, if they include a family member, I find hard to delete. Unless they are unflattering of course, I'm not unkind.

Emails from friends and family are kept, however brief and businesslike; it seems uncaring to throw them away. And personal, hand-written letters are a rare pleasure that particularly touch and hold me - partly because of their rarity perhaps.

Softhearted and sentimental. I flounder in a sea of Stuff and I don't even mind. Except that I can never find the Stuff I need.
Posted by Z at 12:14 pm

you know.. I do that too.. keep a lot of stuff without reading it ever.. somehow, just knowing that I have letters and cards from friends in school, is a comforting thing!

It's part of who we are really isn't it