Shopping and, um, going to the pub. 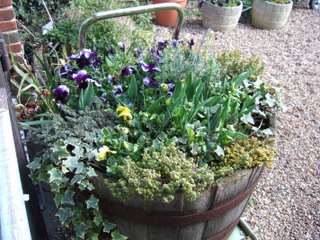 A quiet day. Church, the pub and some internet shopping. A new printer, as after 8 years and some ill-use (I dropped a pin in a couple of years ago and it wasn't good for it) I decided it was time to indulge my affection for a new gadget.

Of course, when it arrives, I will curse it for a couple of weeks and wonder why I was foolish enough to rid myself of a machine which, while elderly in electrical years, was still working. In a month, I will love it.

I used to be a technophile, but then technology outpaced me so badly that I became nervous of anything new. Doesn't stop me getting it, I just need a son or daughter on hand to hold my hand while I bewail instructions that, while making sense in that I understand each individual word, completely intimidate me because they do not actually mean anything unless you know just a bit more than I do.

So, as I've nothing to write about, I've put up a picture of some spring flowers. The tub is resting on a trolley as it's too heavy to take off it. It will have to remain there until I empty it entirely, which won't be for some years.

I take the long view and am patient. Until the credit card starts to twitch and I start online shopping........
Posted by Z at 8:56 pm