Having written yesterday's post early in the day, it seemed quite odd not to do a round-up in the evening.  I've never been one to keep a diary so it seems strange that it now matters to me.

It is a deliberate choice that I write pretty well every day, however.  The rule "only write when you have something to say" is perfectly valid.  However, if I followed it, I would rarely write anything - well, more than that, I'd have given up blogging a long time ago.  The thing is, I am no writer and not a lot happens in my life that 'needs' to be written about.  I've tried drafting posts, sometimes to put out if it's been a quiet day, sometimes because I want to talk about an issue that means a lot to me, and it doesn't work.  I am, indeed, no writer.  If a post is spontaneous, it's better than one I've carefully worked on; or so it seems to me.  Something that has been drafted and saved is rarely posted.  The subject seems trivial, my words are trite, I've lost interest or think that you will have done.  I delete it and have to rapidly put up a couple of photos instead.

The reason I put up photos, or write a quick post, is because I found, in early blogging days, that the longer I left it, the harder it was - that is, in a daily blog the odd duff post could be overlooked, but the less often I wrote, the more it seemed to matter.  So it's not a discipline, it's a pleasure, but it's also a chosen obligation.

What does seem odd is that I call my family by their real names on Facebook and by pseudonyms here.  Not so much with my children - or with my grandchildren, as I rarely mention them in The Other Place.  But it's the Sage.  I keep having to remember where I am and what to call him.  I do like to think of him as the Sage, but it seems quite artificial, when anyone who has followed the link to his website knows his real name. 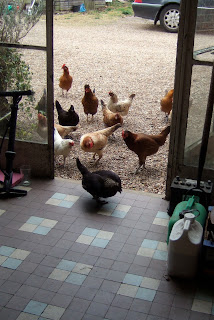 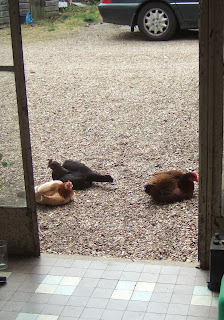 Since you have been kind enough to read all this musing, I shall give you photos of bantams.  The first was taken at about 11 am and the second was 15 minutes later.  They are normally given their lunch after noon, but the black Granny led a deputation demanding elevenses, which was duly given them.  Not wanting to disturb them, I waiting until they had finished basking before going out to do my shopping.
Posted by Z at 10:53 pm

Hello Z:
We really like the spontaneity of your posts and the way in which they convey the 'everyday' life which is something always to be treasured in our book.

The bantams are lovely and remind us of an old friend who used to keep and show them.

Yeah if I only posted when I had something to say I'd have a pretty empty blog.

I was going to publish a book titled "The Thoughts of Gledwood" ~ you'd open it up and just get a blank notebook inside!!

It's very confusing knowing what to call the Sage when you meet him in real life too.

I think the blogs that are journals work best. Some of my family who read my blog say that I write much as I talk. The diarists of the past who are most readable (Pepys, Woodford, White) kept day to day jottings. Their diaries are more restful than rivetting (though they can be the latter when things happen). The ones that don't work are usually kept by politicians, who keep one eye firmly on how posterity is going to judge them. I find that (for reasons of discretion) I often can't put down the more interesting bits of family life. I think if we keep to the everyday trivia (and TRUTH, of course) our blogs should always be quite interesting.
I know - stating the obvious, Horner !!!!

I would miss the Sage if you started using his real name.

I just love these snap shots from your life, the people and creatures who share time with you.

Many hugs my darling.

Thank you, Jane and Lance. Spontaneous, or just completely underprepared, I wonder?!

I think other comments may reappear in due course - LZM said that she always thinks of my husband as The Sage and wouldn't want it any other way. I think he was rather pleased with the name when I first told him!