I'm feeling pleased with myself.  I have recruited a new governor.  She's already a governor at another school (which will close in another year, when we'll take on half its pupils) and I have been hoping to get her then, but I had half a chance and took it, and wrote to ask.  And she's accepted.  She is brilliant and will fit in perfectly.  I also, yesterday, wrote inviting another person to join us, and that he hasn't replied yet doesn't put me off, it's fine to take a few days to think about it.  He will also be ideal - I hardly know him myself, but he's experienced as a governor, is a parent at the school and supportive, and the Head knows and gets on with him.

I set a lot of store by having a full governing body, with people whom I trust to get on with things.  When I left my last chairmanship I had got bums on all the seats, and I found someone to replace me when I left.  With my more boring eye on legality, I'm always the first to count up to make sure we're quorate, and there are a lot of jobs to do and, the more people we have, the fewer there are for each of us.  I used to have three subject areas to monitor as well as being SEN governor and now I have one, music, which I do not want to relinquish anyway.

Oh, there was a chaffinch on the windowsill, peering in the window.  Lovely!

This afternoon, I heard a sound in the passageway, and knew who it was.  Black Granny.  She came in and waited while I fetched a slice of bread for her, which she pecked at on the carpet before pottering out again.  It's more like the Beverley Hillbillies around here every day.  The Sage and I had a conversation this afternoon where we agreed that, sooner or later, we would both move upstairs and leave the downstairs to the bantams.  They obviously would like to move in. 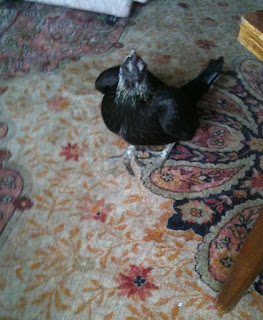 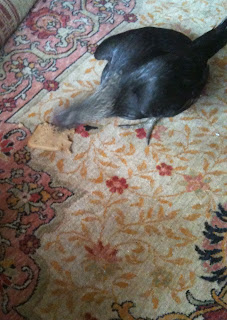 She was shaking the bread so hard that her neck is out of focus!
Posted by Z at 7:50 pm

I thought her head had fallen off!

Ew, John! Although they say that headless chickens rush around!

Well done at finding another guv. Fingers crossed for the guy.

I just love the picture of the Granny. Really makes me smile....

She's an odd-looking bird, a pedigree of a rare old English breed of bantam. Much broader in the wing than the others. Top of the pecking order, although the brown bantam is a strong-minded one too, they wisely leave each other alone.

Sorry, but "yuk". Letting the buggers into the house can't be a hygienic thing.

I'll have to remember to leave my shoes at the door if I visit you, Simon! Her feet are no dirtier than they are.

Oh, and she doesn't have mites or anything and is very healthy.

Bantam royality. Even the chickens are strongwilled there.
I like chaffinks (Finken) very much, their song is always connected with summer. And the blue/red Spiel is lovely.

It was very amusing, craning its neck to peer in the window!

Having a bantam wandering in and out is no stranger than dogs or cats, if one thinks about the list of domesticated animals.

I might draw the line at a cow though. Even Big Pinkie.

I have to admit that when our chickens shared the same part of the garden as the cats and the humans we did have a problem of poo on shoes not to mention nibbled vegetables. Now they have their own half of the garden fenced off and I always have to change into garden shoes when I go and see them.
All the same, I'm sure Black Granny knows better than to poo indoors!

Dave, I have an idea! Taking a tip from Saki (whose short stories have governed my entire life), I shall invite Big Pinkie into the drawing room and you to paint her. Your "Ox in a Morning Room, Late Autumn," will be one of the sensations of the Paris salon and, within a couple of years, you will be exhibiting at the RA with "Barbary Apes Wrecking a Boudoir."

Actually, it's one of the things that puts me off geese, Sandy. Big green turds!

I always think 'goose turd green' should be in the art suppliers' lists (although it's one of the less pleasant greens).

Perhaps I could take a photo, and then work on the painting in the comfort of my studio.

Nor must we forget Sand-grouse roosting on the Albert Memorial nor Wloves and Wapiti Fighting on the Steps of the Athenaeum.

Well done with the governors. Good for you. If you'd been my chair of governors in former times what might we not have accomplished!