It's been a brilliant day.  Lovely weather again - English people cannot go a day without remarking on the weather, whatever it is.  Every conversation includes comments on the lack of rain but an appreciation of the sunshine.  We went to Gill's birthday party in the afternoon, left around 6 o'clock to go and put the chickens to bed, and set off for Roses' birthday party.  In the afternoon, there was a mixture of people we knew and those we didn't, so we chatted to everyone.  There was one almost silent girl, I still don't know who she was, Gill and Andy's three young grandchildren were there so, at one point, I asked her if any of them was hers.  "No!" she replied baldly and in a voice that didn't invite any comeback and I fell silent.  I did think of something else to say and turned to her again, but she was fiddling with her phone and didn't look up.  Gill's mum, who is a delightful old lady who never stops talking, invited me to call round before long, so I've said I'll go the week after next - this seems a long way away, but I don't think I'll have time next week.

I had briefly met Roses' Boy and a couple of his friends, but didn't know anyone else, but everyone was really friendly and chatty.  Several asked me how we knew each other.  I'm not sure if they all knew about her blog before tonight, but they do now (she didn't seem to mind being outed).  Roses looked beautiful and was wearing a fabulous dress.  I wore my emerald ring, which doesn't get too many outings, because it's a bit delicate for too much daytime use and I don't normally get out much in the evenings.

I was looking for a little card to go on her present, having sent her proper card earlier in the week, and found a photograph from my first visit to India.  Having finally found the CD to load the scanner software on the computer, I can show it to you.  We were being driven somewhere in Chennai when we saw this elephant looking in the hardware shop.  Just brilliant.  It was looked on in such a matter-of-fact way by everyone else. 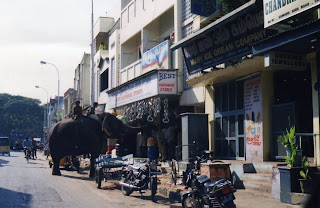 how lovely! no matter what the gift was, darling roses, received 2 from you with the photo. xoxox

I probably wouldn't have been a lot of fun if i'd been there. I think I used up my affability for the year at your party.

Shame it wasn't a luggage shop. Or a swimwear shop.

Hello Z:
We do so love a party, and two in one day seems to us like riches indeed. It is, we think, fascinating to meet the friends of friends but, in our experience, they seldom match one's expectations. Strange!

The photograph of the elephant is remarkable, made more so by the complete indifference of everyone else to its antics. Just a normal day on the town if one is in India we suppose!

I had such a great time. I'm so pleased you both came. I loved the way you and the Sage just slotted in.

No, my blogging isn't a secret, but as some of them don't, it's probably not in the forefront of their minds.

I adore my pressie. I opened it this morning and the Teenagers were well impressed. It's gorgeous. I know exactly where it's going to go too.

Savannah is right, the picture of the elephant is definitely my second pressie.

Glad it all went well. I see there are Elephant brand bean bags, silverware, cement, rice cookers and fertilizer, to name but a few. Was he perhaps advertising his wares?

I'd never miss a party if it was up to me.

Well, I didn't really have expectations, since I didn't know who was going to be there. I know one of Roses' friends via Facebook and we roundly abuse each other, in the friendliest way, but he wasn't able to be there.

Dave, you would have been fine because it was really friendly but also not loud. Your affability would not have been overwhelmed.

Elephants don't really wear sandwich boards, Chris, although they are very partial to a sticky bun. And to bananas; if you tap one on the head, he will put his trunk up to receive a banana. If you're sitting on him at the time, that is. Or so I've found.

LZM, Roses has brilliant friends and gives a great party. I'm sure she'd invite you next year if you come over...

An elephant on the street! How cool is that!?

I know! It was the casualness of it that made it so brilliant!

Love that picture, Z! Embarrassed that I am only seeing it now, of course, but also relieved to find a silver lining to my insomnia.

Hey, drop in when you can't sleep, darling, and I'll soon make you nod off!