It's an interesting thing, that we are now getting more enquiries from people interested in being a school governor.  We do have one vacancy, but it's for a parent governor and someone is considering it.  We've not had this situation before; only a couple of years back we had several empty seats and couldn't fill them. I'm not sure of the motive; I know that our school has a very good reputation, there is also the matter of our academy application - the subject is in the news at present and if someone is really interested, that's great, but I don't want people to become governors who just want to influence policy and be in the know, but won't do the donkey work and aren't bothered about the school itself.  It rules out a lot of people who don't have sympathetic employers who will give time off, but to know about the school, you have to come in to see it during the day.  If they are strong enough in other respects, it can be okay for a few governors not to do that, but the majority need to be available for daytime meetings, classroom visits, the occasional assembly etc and to take part in new staff interviews.  Some time ago, I think it was 1999 but can't quite be bothered to check, the then government had one of its "parent power' brainstorms and made a rule that one third of governors had to be parents.  We have never been able to fill those available places for more than a term or two, as when you have teenage children, odds are that you are busiest in your careers and least likely to spare time for active governorship.

Anyway, enough of that, it's half term and I'm taking the weekend off, if not the whole of next week.

The Sage and I went to visit Hadrian this afternoon.  His mother isn't keen on photos of her children being on the internet, so it may well vanish in a day or two, but here he is, in his Granny's arms. 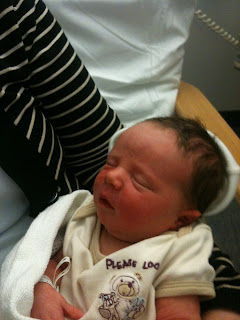 Squiffany was also born with a great mop of brown hair, which eventually lightened and now is blonde and wavy.  The Sage and I cuddled him close for half an hour or so and are looking forward to his homecoming tomorrow.  Dilly is very well, and also looking forward to coming home.
Posted by Z at 8:41 pm

That's a lovely photo! I love the concentrated sleep of which new babies are capable. Again - our congratulations. You are very fortunate to have youngsters so near you.
Regards, mike and Ann.

Seconded. Hadrian looks gorgeous, lovely head of hair, glad all is well and the family will be home together tomorrow.

Of course I agree with the others. He is adorable.

Of course, all babies look alike.

Not quite, Dave. You are unable to distinguish between them, maybe, but that doesn't mean they look alike.

Everyone's really looking forward to his homecoming, and his aunts and uncles (on this side of the family) will be visiting over the weekend).

I've been busy this week so have only just caught up on this - glad to have caught the photo before it disappears. He's gorgeous, isn't he? Many congrats to Al and Dilly. And what fun for S and P!

So glad you posted a picture, even if it will disappear shortly.

Thanks for sharing a photo of the precious new baby. Adorable. Really tugging at my heart because both my babies had great mops of dark hair like that. Enjoy!

None of mine did, so we were surprised by Squiffany's hair, which was even longer on top than Hadrian's is.