Bringing on the wall, Day 20 - Dave is taken in by an Imposter

Things went very well again. I had spent a long time yesterday assiduously scrubbing bricks - all the ones lying loose which, fortuitously, would be about the number needed for the morning bearing in mind that Dave would be fitting another ornamental brick, which takes a long time. The forecast was iffy but generally we were hopeful of a morning's work.

Imagine my surprise darlings, if you will, when I read Dave's blog, which seemed to have been taken over by someone writing in the style of a lesser-lettered Z. Yes, I know. My mouth would have dropped open if I had any slack-jawed tendencies. You may require a comparison - here you go. Now really - is that, for one minute, anything like me?

Dave was wearing a rather fine pith helmet when he arrived and looked slightly out of place in a Norfolk garden rather than a Cameroon jungle. He cowered slightly when he saw me, which was quite inexplicable. I gave him a cup of Earl Grey, which had rather a lot of tea leaves floating in it unfortunately and he gradually relaxed enough to remove his "protective headgear" as he called it and start work. We were doing well until 11 o'clock when the first drops of rain fell. We covered the mortar and sheltered under a tree. It wasn't a long shower and we finished at 12.30, pleased with the morning's work. Since I counted the bricks (I didn't mean to, but when you stack you can't help counting and multiplying, can you?) I knew that we'd laid 67, plus the ornamental brick and the half-bricks around it.

Pictures? Of course. Here you are. 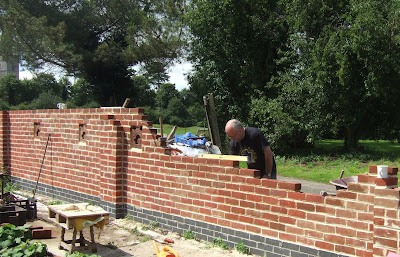 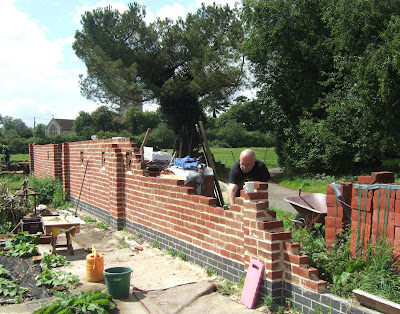 I've mentioned that the bricks are not all exactly rectangular - here's an example. The top brick is sitting on another which is the reason it looks larger, but you can see that there is a definite curve. Some of them are more bowed than that, and the lower one is cracked but not broken - all part of the hand-made charm. The wall will look old and weathered from the start, which is just what we want. Furthermore, it nicely disguises and excuses any mistakes we make. 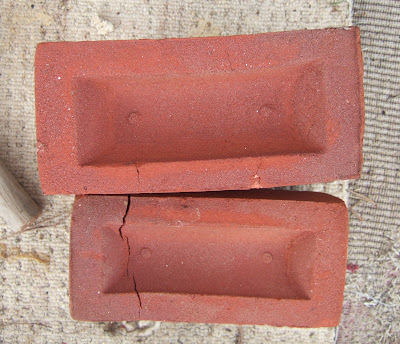 Of course, two (or more) curved bricks one after the other can even give the impression that there's a bow in the wall.

I was always led to believe that Dave wasn't a pith head.

Dave looks as if he needs another hair cut.

I'm pretty impressed with the wall Z, going to get it finished this year??

We should get to the corner, and then finish the final third next year.

Another 'dave' once took me off int he same way. I was shocked before I was amused. And then I was amazed, because it's not something I could do, even when I've read a lot of somebody.

The irregularity of bricks (even machine-made ones) is something that always surprises me. Until I think of how they are made (and cf my pottery attempts which seem OK until they are fired when the unknown creeps in).

And the wall looks amazing. You'd never have managed it without Dave, would you?

I did know it was going to happen, BW, though I had no part in the writing. I also - for I send myself up to an extent - knew the mannerisms that were begging to be picked up. Actually, I thought he was quite kind on the whole. Except for the drinking thing.

No, we wouldn't have managed without Dave. He's great.

If the new Immigration Centre in Diss was built with wonky bricks there would be an outcry!

Using damaged goods will reduce the life of the finished product!

Sure you're outraged and not Dissgusted?