Bringing on the wall, Day 15 - Dave shows his knees

The second ornamental brick was put in today. After careful measurement and experimentation, the Sage and Dave decided to put it in the same way round as the first because that would make the better fit.

Dave wore shorts. If the heatwave lasts, maybe one day I will too. Not that I'll look as good as he does. 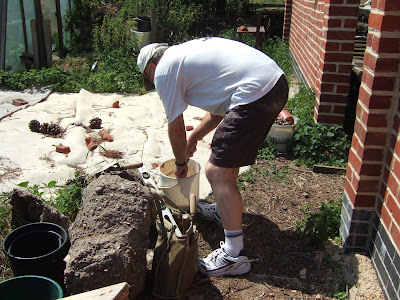 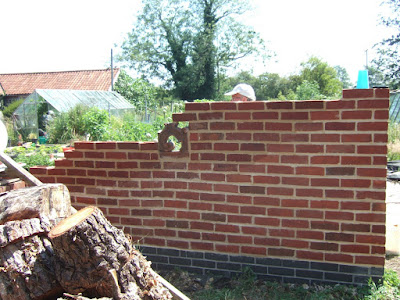 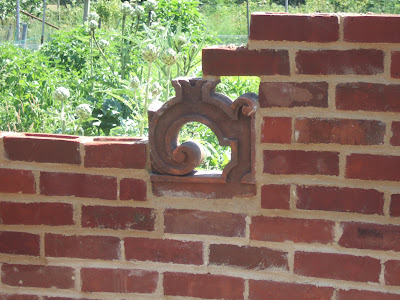 The first ornamental brick - you'll see that Dave put in a deeper mortar bed the second time, so that the slice of brick on top wasn't required. 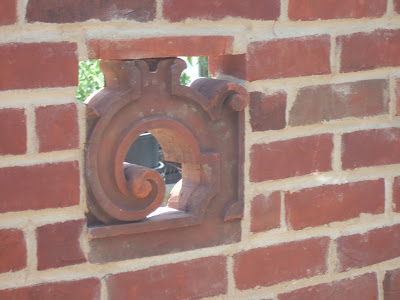 I know it looks on the huh, but that's my photography 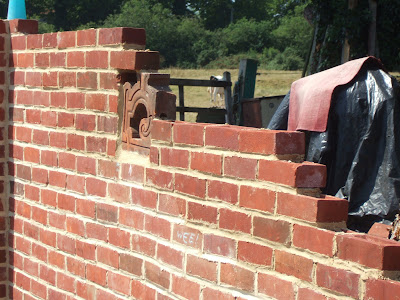 Kenny came to call, with some of his 90th birthday cake. 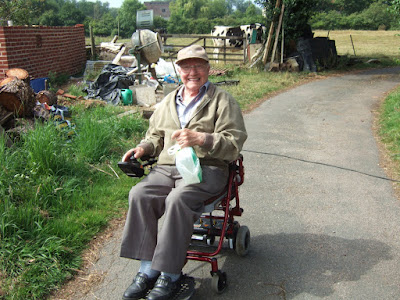 Al shut the shop today: or rather, he didn't open it, and they all went off to the Norfolk Show. They took plenty of drinks and sun cream and a sheet to cover the children when, separately, they had a nap in the pushchair. They also spent quite a lot of time in the wooded area where there are displays of country crafts, such as bodging, so they came home looking quite cool and comfortable.

I had a governors' meeting, which I hadn't quite realised I was going to chair. Still, nothing if not adaptable. After dinner, Weeza phoned to arrange to come over on Friday. The Sage spoke to her first, then handed the phone over to me while he went outside to shut up the chickens. He returned. "Can you help? There's a cow out." Indeed, just outside the door was a large cowpat and a (larger) cow was eating the lawn. The Sage went to open the gate to the field while I stayed and chatted to her. Then her face brightened as she saw a box of chuck-out apples that the Sage had brought home from the shop to give the cows. She reached for one, knocked the barbecue and panicked a bit when it started to fall - I caught it, but she ran to the other side of the lawn where she saw a plastic golf ball the children play with. She started to eat it, I sprang forward, she panicked again (panic is a relative term, she tossed her tail and hurried for a step or two but didn't actually stampede) and the Sage got worried. "I'll get Al" he said and went off. "No, please don't go," I said, but it was a bit late. The cow wandered off towards the hen house, and I went around the back drive to head her off if she made for the road. As I rounded the fork in the drive, she appeared coming towards me and stopped uncertainly. I could hear the Sage returning, so I took a couple of steps back, she followed me, and then went around the drive, just as I wanted her to, towards the field gate. What a good girl. I found the spat-out ball on the lawn too, so all was well.

Yesterday, we had the first tomato from the garden. Oddly enough, it's ready before any of the ones which have grown in the greenhouse. It's a Gardener's Delight. It was also a blackbird's delight - I'd seen in the morning that it was ready to pick and I should have then. Still, the Sage, I and the blackbird ate it between us. We also picked the first of the french beans.

Tomorrow, I'm going out on a jolly, here. It's a NADFAS trip, but not the society I belong to but the other Norwich branch - they had some spare tickets. I invited the Sage and Dave - either or both of them - "my treat" I said, but they didn't think it would be enough of one and turned me down. You'd think one of them might have kept me company - as it is, I'll have to make some new friends.
Posted by Z at 9:59 pm

Thank you, Dave, for wearing white socks with the white shoes. Lots of men around here seem to think dark socks are okay with white shoes-ugh!
The adventure sounds wonderful Z.

What a lot of excitement! And what exactly is "bodging" please?

Bodging is turning chair legs with a pole lathe.

Actually, that looks like a random collection of words, doesn't it? But it's true.

I just love those bricks

Dave turning down something with 'subversive' in the title?!
You surprise me!

Z - I think the surrealism exhibition is the same one I saw in Manchester. Not quite what I expected - interesting though.
Are you sure you didn't take Dave?

See, I said below that it should be referred to as 'The Hol[e]y Wall'.

Built by a churchwarden and a minister, now with two holes.

It wasn't what I expected either, Kaz. I found myself liking the films best, to my surprise, once I quelled the initial irritation at the sound of the stick on the railings.

There are more holes to come, BW - I think the Sage has 15 of those bricks altogether. Dave is in charge of putting them in place and I'm doing the less skilled filling-in between.

I know my place.

You're not feeling nostalgic, are you Greg?

Not at all. I'll always be a Norfolk boy though and it made me smile to see it.