Bringing on the wall, Day 19 - I rely on Dave for information

We got a lot done in our 2 1/2 hours today. Not that I joined in from the start, as I was looking after the children until 10 o'clock. The first photo shows (to the right about from the yellow spirit level) what was done today. 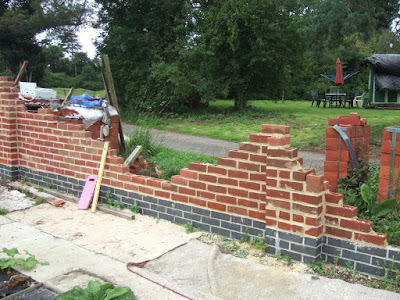 The second shows what we've done so far. 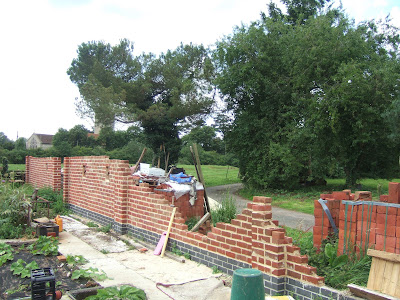 Dave is busy tomorrow and the Sage has a couple of things on too so, weather permitting, we'll be back on the job on Thursday. I'll be filling up the lower levels to 9 courses (not including the footings) and Dave will get on with the next decorative brick and the higher ones. Then I'll move on to the other side of the pillar so that Dave can finish that off. The Sage is kept busy supplying mortar and cleaned and wetted bricks.

During the morning, Dave mentioned that the Sage has now decided to have pillars at the ends: that is, that we'll add a couple of extra courses of bricks on each pillar before putting on the cappings. Dave suggested this some weeks ago but the Sage reserved judgement. He still has said nothing to me. I'm waiting, I'm patient. When he finally refers to it in passing, he'll have completely forgotten that he hadn't consulted me at all stages. I'm used to it. On this occasion it doesn't matter at all as it's his choice, but it would be all the same if we'd definitely decided together about something and then he'd changed his mind. One has to make a decision about how much this sort of thing matters, as a principle. The simple thing is that he spent 36 years as a bachelor and he became used to pondering things through by himself. If a further 36 as a married man hasn't changed him, nothing will. Having said that, he has improved. Time was, he'd not have talked about it to me in the first place about the original decision, let alone before he changed his mind.
Posted by Z at 8:24 pm

Gosh, it looks as if we've done quite a lot, doesn't it?

Yes, before long I'm going to have to stand on a ladder behind the gas tank to get it all in.

You got married when you were 5???

Oh Simon, have I ever told you that you are the perfect man? If not, let me tell you now.

That's some wall, how long is it?

When completed, lom, it will be something over seventy miles long, and cross several county boundaries.

There's a French saying On connaît le maçon par le pied du mur, you know the builder by the foot of the wall. Not a dollop of waste cement to be seen. You're in safe hands. Unless it's all the other side, of course.

Is that folding cricket sight-screen in the distance, extreme right?

It'll be about 100 feet long, LOM and 5 feet high. Though we could keep going to the next county a mile away I suppose.

No waste, Christopher - I want to plant vegetables under that wall (the bed is presently caroeted to protect it from the ravages of our feet. The other side is unsullied too as there will be a flower bed.

I'm afraid you see our elderly revolving summer house. Moles have tilted it just enough to prevent us opening the door more than a few inches and the roof needs refelting. It's a project for next year - it has to be dismantled (it's bolted together), repaired and re-erected. Last time the Sage and I were capable of it, but we're 20 years older now.

carpeted. I haven't put my lens in this morning.

Will it be visible from space?

Funnily enough, Roganswers that very question this morning. And it seems the answer is yes.