It's been a long gap since we last did any bricklaying and we have acknowledged how quickly the summer is passing. We still hope to get the long part of the wall finished this year, but much depends on the weather. You don't get a lot done in 2 1/2 hours, which is about our working time of a morning. However, if we get some dry weather in August there's a good chance of cracking on and getting a good stretch done in the next few weeks.

Dave fitted another ornamental brick, whilst I started at the bottom of the next section. Next time, Dave may begin the next pillar so that I've got that to work to - he has to be careful of his back so is better with the higher sections, which I'm too short to complete. I suppose I should do the lower part of the pillar actually.

It was sunny all morning and very hot some of the time - lovely after all the rain we've had recently. 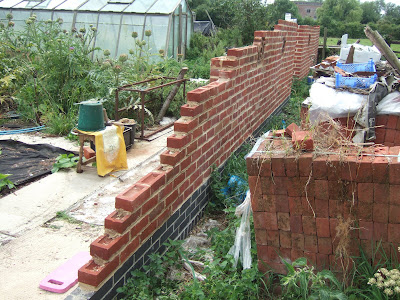 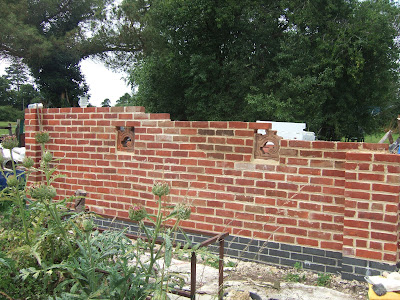 Yes, the summer house does need work done on it. That is not scheduled for this year, unfortunately. There's not time. 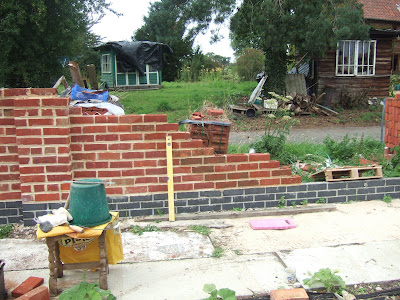 During the morning, I phoned friends to confirm that I'd pick them up to take them to our lunch engagement. The phone was answered by one of the sisters, sounding woeful. They aren't feeling too well and it may be flu - just in case, they've cancelled lunch. I'm very sorry for them, but also relieved that the symptoms showed now rather than after I spend an hour and a half in the car with them. At least it means that, not having to pick them up, I can look after Zerlina in the morning while Weeza goes for a haircut. Being used to a London hairdresser, she's a bit apprehensive at the prospect of sampling the local salon - she still has her London Ways at heart. Though she doesn't miss the Tube or the crowds.
Posted by Z at 11:02 pm

Is the summer house the one with the plastic tarp or the other/closer building? The wall is really looking excellent. You, Dave and the Sage should be extremely proud of your work.

I think Dandy really wants to come and supervise the building work, and explain to us where we've been going wrong.

I agree, it does look a bit wavy in the first pic.

Have you tried using one of those weight thingies on a string?

The whole picture is on the huh - look at the greenhouse, that's tilting too. I don't stand straight.

Dandy is welcome to come and show us how it should be done - we've got 4 trowels so, with the Sage mixing the mortar and someone keeping up supplies of wetted bricks, we can easily have 6 people working at one time. The whole job would be done in no time.

I only use a weight thingy on a string when I go crabbing at Walberswick, Rog.

Oh, Martina, I didn't answer you. The summer house is the green edifice with the makeshift roof. The other is Kenny's Shed. Since I removed the mostly-dead hedge, it's been in the wrong place but it's too old to move and too well built to condemn. In any case, I need to build a new shed first. That's a job for after the wall is built.

I'd love to have a go, but unfortunately I am somewhat over-committed just at the minute.

I continue to marvel at the progress of the great wall!

A great hairdresser is so uplifting, so I hope Weeza finds one who pleases.

She was pleased with it - just a fairly simple trim, she didn't risk a new style!