The pitter-patter of tiny Z

I have to admit I overdid it a bit this morning.  Several days of strenuous effort haven't begun to break the back of the cutting - look, I'll show you what I mean. 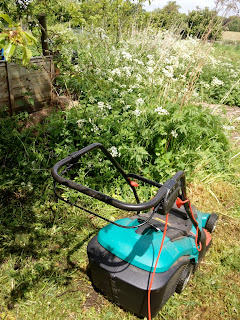 This is now the height of it, and there's a load of rubbish in there.  I don't mean weeds, I mean pots, planks of wood, lengths of pipe, and I wanted to clear it all before the grass grew long, but that only happens with a concentrated effort, and for various reasons, not enough of it happened.  So some was cleared, some wasn't.  The theory is that I cut the lawns and areas that aren't rough grass, and the Sage does the rest on his sit-on mower, but he's not big on clearing, so he only mows paths where he knows there's no junk.  And he doesn't do it very often, and a nagging wife is the dreariest thing in the world, so the best way to get him galvanised into action is to get started on some work myself.

However, I weigh a lot less than I used to, and what I remember from when I used to be - well, not what I weigh now, lighter than that, but not by much - a slender young thing, I was pretty strong but I didn't have a lot of stamina.  When I worked hard physically, I used up all my strength.  It seems to be the same again now, with the disadvantage that I'm a couple of decades older and have puny little muscles.  But I'm very dogged and determined and I'm going to get this job done.

I knew I was tired when I cut through the lead of the mower.  I know, what an idiot.  I've been so careful and I always have the lead over my shoulder and check constantly.  But, having checked for and removed rubbish, I ran over a bit of plumber's pipe and I irritatedly picked it up, chucked it on the pile and kept going without looking.  Oh well.  The Sage mended the lead while I got on my bike to go and buy insulating tape and I was back in business a few minutes later.  And I redeemed myself an hour later, when I noticed just in time that he was about to drive his mower over my lead and shouted in time to stop him.

I was determined to carry on until 1 o'clock, which was stupid, I should have stopped when I wanted to stop.  Because I realised, once I did finish, that my heart was pounding and, though I rested, it took quite half an hour to settle completely, and then I was cold and exhausted for quite a while after that.

I'm fine now.  And I'm babysitting this evening, so I'll just sit and relax, and tomorrow and Monday we've got various things on, but all very restful.  Another jolly on Wednesday, but not a strenuous one.

You may wonder why junk has been put in unsuitable places.  I dunno, darlings, seems stupid to me.  But the kitchen garden has always been my province and, especially when I had a bad hip, I tended not to look at what I couldn't do anything about.  Now I've taken on the job, I'll get it done.  The Sage never does, it's very rare for him to finish anything but, for me, the only point of taking on a beastly chore is to have the satisfaction of completing it.
Posted by Z at 3:39 pm

A String Trimmer (gas or electric) would be perfect for such an application. At my last home, the side and back yards were rocky and steeply sloped. So I rough cut them with a string trimmer as the terrain would ruin a lawnmower.

Thanks, LX, it is what I need and I'm being lent a strimmer, as we call them here, to see if I can manage the weight of a petrol one - an electric one won't do as some of the stuff to be cut is further away than my extension lead will reach. At least we're on the flat here.

Didn't you employ a gardener? That sounds a good idea to me - supervising gardening is so much more fun!

Unfortunately, he decided the uncertainly of self-employment wasn't for him and took another full-time job. We can get someone for a few hours here and there, but there are plenty of jobs that are too heavy for me or that involve scary tools like circular saws.

I too have someone who mows around things without clearing them away. I have to list every item to be moved if i want the area of grass done properly - for years he has pulled the 'but I thought you might want it there' ploy. I have started to ask him to move things now, but sometimes I forget that I have to as I can't lift heavy things anymore. You have far more ground to clear than I do, though.

We have a terrific "tame" gardener!

There's a lot to be said for having a pocket handkerchief sized garden, we find.

Once it's moved, nothing is going back. So much happens that isn't my choice that I have to take control of some things. I did it in the house last year, this year it's the outside.

I think I'm too untidy myself for that, Mike - but a garden I can enjoy and not be worried by would be wonderful.

Today's junk is tomorrow's archaeology, as someone said. (Me, actually.)
Leave it where it is - you owe it to future generations. (That's my excuse, anyway.)