It's quiet at the Zeddery. Too quiet. 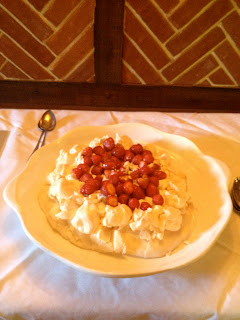 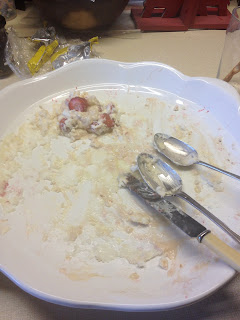 There was hardly enough left for Chris, although packaged up and sent by special delivery (as suggested by Blue Witch), I'm sure he'd have been grateful even for small crumbs.

He was not the only absentee in fact, because the Gardner family should have been with us too.  They had been obliged to cancel a couple of days previously because their kitten-sitting arrangements fell through.  In fact, it was a good thing as first Amelie and then Lisa came down with a horrid sickness bug, Lisa in particular was very ill and they would never have made it here (and if they had, we'd all be in quarantine right now).  Since Lisa is very pregnant, it was quite worrying and Phil has had quite a busy and stressful weekend.  Good news on his blog is that she's on the mend now, though.  I should say, by the way, that I'd planned two extra puddings that were cancelled when I discovered that he wasn't coming.  They'll come along and stay with us once Junior is born and we'll show them the heady sights of Norfolk and North Suffolk ... or maybe take the baby for long walks so they can catch up on some sleep.

Wink took Dilly and me, with Hadrian, out for lunch today.  A slight setback when the pub I suggested turned out to be closed on a Monday, but we probably did rather better with my second suggestion as the garden was lovely.  We sat under the shade of a huge parasol and enjoyed looking at the flowers and eating substantial sandwiches - goat's cheese and bacon for me, sausage and onion for Dilly, prawn for Wink.  Then Wink set out on the long drive home (some 230 miles) and Dilly drove me home, and then I went to sleep.

And so to bed, darlings.  Back to the real world tomorrow with Year 9 music and composing in 5/4 time.  It'll be fun.

Glad you had a quiet time! xx

I know, darling. Just the two of us, making polite conversation.

I'd just like to reassure you that when we do finally grace you with our presence, you'll be able to post another set of photos like the one above. Even if Lisa and Amelie are sick again and not eating, I think I'll be up to the job alone.