Here we are, darlings, my childhood companion, Bobby. 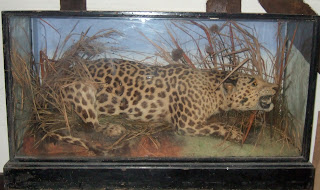 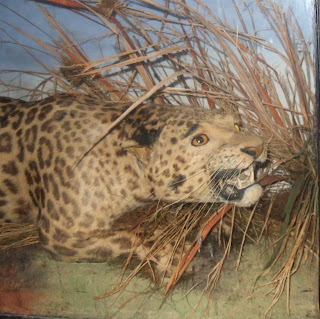 Not a mark on him, he was throttled rather than shot.  If you haven't read yesterday's post, please do and follow the link before being horrified at my posting pictures of a stuffed leopard.

He's been in a garage (not always the same garage) for over 30 years, but before that he held pride (I don't know what the term is for a leopard*, I trust he'll forgive comparison with a lion) of place on the landing in my childhood home.  I don't know if he'd picked up any creepy-crawlies, Al and I discussed the possibility of putting him in the freezer to kill anything unwanted, but leopard and case are jolly heavy - they'd fit in my freezer if I cleared it out first, but we'd never be able to lift it out again.  And I wouldn't care to take him out of the case where he's resided for the past century.  It would need specialist assistance.

Not that it isn't available, they did just that at Norwich Castle Museum a while ago.  There was a problem with their extensive collection of stuffed animals, I think that woolly bear got in (that's the larva of the carpet beetle) and everything was put in freezers to kill the bugs.  I gather that, ironically enough, it was the polar bear that posed most problems in terms of freezer space.

He's at the end of the landing and there isn't much natural light there.  Having lights on or doors open to let the light in from the windows just made reflection and glare, so these pictures were taken using flash, something I normally avoid with my camera as it's better without.  But there we go - come to the blog party on 26th May and you can see Bobby for yourself.  And see me too, of course.  And each other.

He is a lovely beast! Perhaps could you put something like Frontline in the floor of his room to kill bugs? If the case is airtight, perhaps chances of infestation are small/none.

He is lovely - he looks a bit scared. Maybe the light is frightening him after 30 years in a garage.

Wow! he is lovely!

I would be inclined to freeze him to kill the bugs - or Frontline type stuff?

Oh, you've got me going on collective nouns now. A crash of rhinoceroces, rhinoceroci, whatever - a romp of otters ... Bedtime, Tim

This is wonderful stuff because it is so unique. I imagined the Sage saying "But Darling, I thought you wanted a leotard for your birthday"

Rog said...
This comment has been removed by the author.
7:21 am

Those eyes are rather haunting.

I wonder why the taxidermist chose to stuff him with his mouth like that?

When I first started teaching, one used to be able to borrow exhibits like that from the School Museum Service. It's years since I've seen any in schools. Wonder if the service still exists anywhere? And, if not, what happened to the cased beasts and birds?

Magnificent! What an amazing story to go with him as well.
On the subject of collective nouns, here are a couple that are in use at my work:

And on a slightly different note -
A "Spur-Lash" is the sound that a stevedore makes when he falls in the river. You probably need to work here to get the full benefit of that one.

Well, the eyes are glass of course, but I agree, and don't seem to go with the snarling mouth. But on the other hand, he attacked a man, so must have been pretty vicious or extremely hungry.

Present least likely to be given Z by the Sage - a leotard.

The collective spur-lashes would be something to hear, Sir B.

Wow. You never fail to surprise me.

Oh, forgot to say - the case is sealed and I can't see how to open it without dismantling it, something I'm not prepared to do myself. But I doubt it's insect-proof after all these years. It might be possible to squirt insecticide through a chink, I suppose.

He was called after my mother's dog, AQ, a feisty little terrier.

what a story and what a surprise for you, sugar! i'm just catching up on all your entries and all the bogs i've missed of late...but that's another story! cheers! xoxoxo

Hang on, John, it's a cat not a car. And jaguars come from South America - Gt Uncle Ronan was definitely in Nigeria.

It could be a Jaguar - it's certainly an Ex type (see what I did there?)

Once the sale is over, Sav, I hope to come round commenting again - I've been very lax recently.

Sir B, Monty Python can't hold a candle to you.

What a fabulous story. I have to agree with Dave that the first line of the original story is one of the best ever and how lovely to have your childhood friend back in residence.
I'm completely enchanted by the whole tale.