Yew think about it

What happens in this household is, one of us has an idea and we all get quite excited.  Then we think about it and, indeed, sometimes the mere verbal expression of thought (impulse, quite often) makes the speaker pick all the required holes in the idea and it goes no further ... except that it forms a series of links and it is not uncommon for a more practical idea to come out of it at the end.  Once in a while, the first idea is the best.

I took Weeza to show her where we are thinking of putting the summerhouse.  It is not in a good position now.  It was all right when the laurel hedge was by the lawn, but since we removed that, three or four years ago (one of our better decisions, beastly thing) it has just looked odd.  And, to be honest, we never used it much because we prefer sitting on the lawn itself. Mostly it was used for storing lawn furniture, until the Sage started to put in old bikes and stuff too.  Anyway, moles have undermined its foundations and it needs to be taken apart, refurbished and re-erected, so that would be a good opportunity to move it altogether.

This is a large space overall, and you would think there would be a good choice of sites, but there isn't.  It could go on the edge of the lawn, but a lot of work would have to be done on levelling the site.  The Sage came up with an idea which was rubbish.  Then I suggested somewhere else, which might do, but isn't ideal for various reasons, mainly because it would mean removing a wall containing a raised bed; no great loss, but a lot of work. 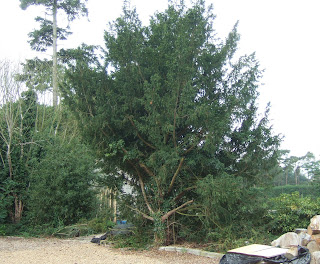 So, being a sensible Z, I asked Weeza what she thought.  She suggested another situation which we are quite taken with - but it would be very close to the yew.  This is the yew.  The summerhouse would be just to its right, where the log pile is (that's the logs from the dead oak that fell down a year ago, waiting to be split).

If the yew were well sited in the first place, that would be one thing.  But you can also see the reason for it being cut hard back to the trunk on one side. 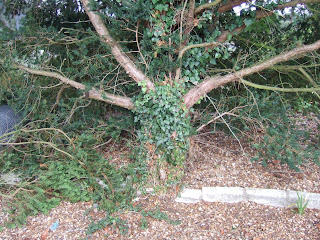 It's right by the drive, and has broken the edging.  I'm not quite sure why it was ever planted there, right by the kerb.  Or possibly, left there when the kerb was put in.  It has to be cut right back periodically, the last time was three or four months back.  It grows slowly, but all that bare wood will be covered in new growth by next year.

From the other side, this is how it looks - 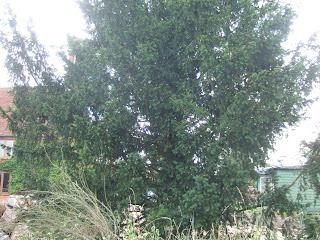 In the foreground, the dead wood is a rosemary which, after twenty years, finally died back in the spring when it was so dry.  I didn't notice until it was too late.

There is about half a mile of hedge around our fields, all native British species and we leave it to grow naturally as far as possible, just cutting back as necessary against the road.  It really goes against the grain to consider cutting down a healthy tree, but sometimes it can be the most sensible action.  If we decide to leave it, it will need some more pruning to improve its shape.

Actually, I wish people wouldn't plant trees in the wrong place to start with.  My mother used to do that, she never took growth into account.  I used to point out how large one would be after twenty years, and she'd say that she would be dead by then.  I'd say that, even if so, that would mean that a healthy tree in its prime would have to be cut down because it was too close to the house.

Anyway, no hurry.  I'm going to keep looking for a good site for the summerhouse.
Posted by Z at 9:37 pm

I deserve a slap for some of the places I've planted trees. I went through a phase of growing acorns and then planting them in the garden. Well most things I plant usually die..... except for trees!
I think you've put a lot of thought into your gardening plans... unlike me!
Sx

I have nothing to add today. Yew know best.

She planted a eucalyptus, which she wanted as a tree rather than cutting back so that it bushed out - sadly, it was higher than its distance from the house within five years and had to come out. Planting a seed seems so much more harmless, though.

I should cut it down. It's not as though there'll never be another yew.

No wonder you're so poplar, Chris!

I hope this run of puns doesn't turn into a chêne.

They'll be one elm of a row if you cut it down!

I too have had a pet peeve with people who don't consider the mature size of things before they place them.