I done a lol (copyright Vicus, I believe, whom I acknowledge with thanks) when I read the comments in Liz's post about her hamless sandwich.  It reminded me of a story my mother told, when she was a young woman in the Land Army.  Most of the farm workers were called up, and the farmers, who were two brothers, some once-retired men and the Land Girls worked the farm.  One day, they all sat down in the harvest field together to eat their packed lunches (my mother lodged with the farmers and their mother so Mother did the pack-ups) and someone noticed Old Bob gloomily peering between two slices of bread.  "What you got for dinner, Bob?" he asked.  "Piece of bread cut with a hammy knife," he replied.  Which expression, of course, entered family folklore.

Expressions do, don't they? Sometimes, it's something that's said that strikes someone as funny, sometimes it's a misused or mispronounced word, especially by a child - if the last of these, you have to be careful where you say it, as outside the family circle it looks as if you don't know how to say it.

In particular, we use expressions that refer back to old friends of my mother's, who lived in Wrentham (really can't be doing with putting that backwards) when she did.  Jimmy and Ruby.  Ruby loved to come up behind you, put her hands on your waist and give a tickle.  I loathed it, I have to say, and she finally stopped doing it when, overwrought one day, I cried.  Yes, I was nearer 40 than 30, but it just got too much.  Anyway, now, a little tickle is called Rubying.

Jimmy boasts two expressions, one bearing his name.  If asked a question that involved some checking - for example, the time, if there was a car outside, who was at the door, he'd offer to take a look-see.  So this became a Jimmy-look-see, shortened to Jim.  We all say it - 'I'll just go and have a jim, I'll let you know."

He also rather loved home-spun philosophy, and would treat the most trite expression as worthy of great respect, especially when uttered by my mother, of whom he was very fond.  Whatever she said, he would ponder for a while and reply, simply but meaningfully, "Yes, Jane.'  So, if you ever tell me something pretty obvious or come out with a cliché (not that my mum often did, but the expression exaggerates for effect), expect me to say, with just a hint of sarcasm, "Yes, Jane."

Terribly tempting to come back to family sayings, I probably will before long.

It's only fair to give you a picture of Jimmy and Ruby, in celebratory mood. 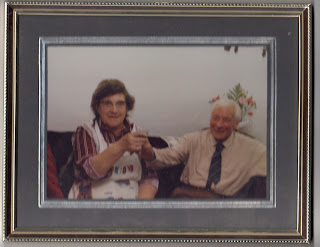 "If we had ham, we'd have ham and eggs, if we had eggs."
I lol often at your blog, hope you don't mind me butting in occasionally.
Oh yes, and a jimmy meant something completely diffrent around here.

Ann's middle brother had a habit as a child, of introducing an extra syllable into words that he liked, so that even now we'll refer to Ely Cathedrical, or going to see the Rhodadendradons. As you say, anyone outside the family probably thinks we can't pronounce those words.

The hammy knife reminded me of the Chic Murray story when he was staying in digs that offered him for breakfast the smallest imaginable pot of honey.

Of course you are very welcome, Tim. There's no riddling connection to jimmy in this house, wouldn't occur to us.

Squiffany, as a very small child, mixed up the words chocolate and yoghurt. So the latter became yogolate.

True confession: I still occasionally like a mayonnaise and mustard sandwich.

I love family sayings, I hope you do come back to it.

I have to say that I completely sympathise with you about the Rubying.

I can honestly say, I wouldn't enjoy a Rubying either. That you've kept your friendship by not responding with violence, just says everything about the lovely person you are.

I can't think of any examples from our family.

Since my children could speak I've kept a "Funny Book" in which we write anything funny they've said. They still fall about laughing at them now. We all know where the "Stringling Bridge" is (to you that's the Clifton Suspension Bridge).

Heinz made (possibly still make) something called Sandwich Spread, which I think is composed of mayonnaise, mustard and finely chopped vegetables. I have never tasted it, but I'm sure your deconstructed version is as delicious, LX.

Poor Ruby probably wondered why I was wary of her and tried to face her at all times.

I will then, Dand, and you could all tell me yours, perhaps? Except Dave, who can stand on the sidelines looking appalled or bemused.

AQ's book is a fantastic idea. Most people don't think to start such books until it's too late.

And I detest, detest, detest, the pseudo-word 'lol'. Written or spoken doesn't matter, it is utterful rubbish. I just hope it doesn't appear in the OED anytime soon... ah, too late, I've just checked, it already has: http://www.engadget.com/2011/03/24/omg-fyi-and-lol-enter-oxford-english-dictionary-foreshadow-th/

Composed and deconstructed, one above another, catch the eye disconcertingly I agree. And that a book is a brilliant idea, I'm trying to remember the expressions that we use so matter-of-factly that I don't notice them.

"I done a lol" was said ironically, of course - but I fear that you are fighting a losing battle, BW.

My expectations, on reading your title, of discovering at least one reference to Tarzan and images of you swinging from branch to branch of the fig tree having been dashed, I can only relate that a rather yonderly aunt once, on an expedition up Box Hill, provided me and my cousins with bread sauce sandwiches. This has stayed in the family as a metaphor for something zany but harmless.

Second daughter Ruth as a child would get words a bit wrong and would sometimes improve them by so doing. When she was about eight she had to write an essay at school describing a member of her family. She chose to write about her grandfather who was a stout old chap in every sense. "My Grandpa" she wrote "is rather porculent". I think porculent is a great improvement on corpulent.
This word too is still occasionally still in use in the family.

I'd like to think that, at least, the bread was brown and the sauce was white, perhaps? Just as a contrast - but I suspect not.

The only other thing is, in the end you can't remember which is right and which is the made up version, especially when it's a really good word.

Does anyone remember that Two Ronnies sketch where Ronnie C played an Arab who mispronounced his words? In my family does and we still pronounce chocolate mousse as choc-ol-at-ie mouse.

Yes, I remember that one, Liz. And you remind me of Nigella's recipe for chocolate pudding (the sort where you pour liquid on top and it inverts itself in the cooking so that the sauce is underneath) - she says it's known in her house as Lemon Surprise Pudding, the surprise being that it's chocolate.

I could write a book. We have practically created a whole other language.

Great post, Z! I am reading backward here to catch up. It is shameful how behind I am on your blog as well as my own.
The b.h. and I have a number of words and phrases that no one else would understand. Perhaps unsurprisingly, they mostly revolve around the dogs or a favorite band or song lyric. And almost always there are multiple sub-references. I have no idea why I get so much enjoyment from this sort of thing, but I really do.