One thing that makes having Zerlina as a house guest a pleasure is how well she sleeps.  This morning, she didn't wake until after 8 o'clock, having been asleep the best part of 13 hours.  I suggested that we walk into the town to buy her baby brother a present (no news yet).  It's about a mile and a quarter, or two kilometres if you're that way inclined and it was a lovely day.  There are four bridges over streams as we go along and so we peered over looking for fish and birds.  We saw a duck, a pheasant and various other birds, we picked and ate blackberries and I showed her the leaves of different trees and explained why a cow needs to chew the cud.  We went into the wholefood shop for some chocolate for Weeza, then into the gift shop and she chose a fat cat rather to my surprise, I thought she'd go for a teddy or a rabbit.  He's rather cute though.  Then we went to the sweetshop for an ice-cream each and sat in the sun on a bench eating them.

On our way back, we thought we'd go the down-river side of the first bridge, which was very lucky, because we immediately spotted five cygnets and a swan just emerging from the bridge.  A minute later, the cob joined them.  The mother was amongst the five, who are almost as big as she is, and the father brought up the rear, looking around protectively.  With parenting like that, it's not surprising that they raised their full brood - although there can't be any large pikes in the river, the best parenting can't protect a baby water bird against a pike.

I only had my phone with me, so the pictures are not very good, but here you are anyway - 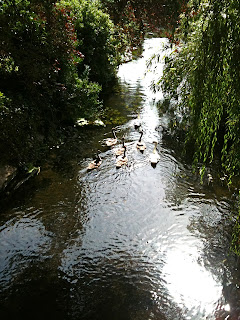 She spent much of the rest of the day with her cousins, so she's had fun.

The Sage had fun too.  In town, we saw that someone we know had got his old car out and was polishing it, so the Sage went and had a chat with him.  It's far older than ours, it was made in 1911.  I don't know if he takes it out much, but it looks in immaculate condition.  If the Sage has any ambition that's likely to remain unfulfilled, he'd love to own a veteran car - which is one that was made before 1919, although to be eligible for the London to Brighton Veteran Car Run, it has to be 1905 or earlier.

The thing about being married to the Sage is, the older I get, the more he likes it.
Posted by Z at 10:16 pm

That is a brilliant picture!

Here, the biggest hazard to baby waterfowl are snapping turtles.

I have never owned a brand-new car (although I have had a new company car, when I had a proper job) - and have no abition to do so. Neither, though, do I want a veteran vehicle. I am oddly unmoved by cars. Except when I want to get places.

What a lovely day.

My to-be-unfulfilled wish is to own an incunabula - a book printed before 1500. My friend, former Latin teacher and then antiquarian bookseller, showed me one once, a New Testament printed in 1485.

The composition of the photos was great, just the camera wasn't up to much! Still, glad to be able to catch the moment.

A new blog post in a few minutes. News at last.