Weeza and Zerlina came over today. Little z has started walking on her own, as long as she doesn't realise it, since the day after her first birthday. Just a couple of steps at a time - mostly she crawls, though as likely as not on her hands and feet rather than knees. Recent photo I hear some of you request - okay, here you are. 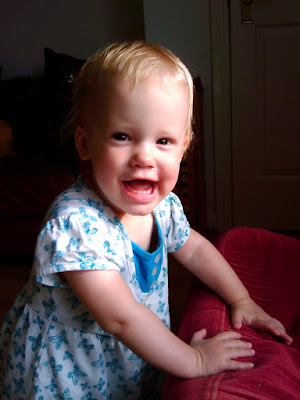 Squiffany is also pleased with herself because she can now swim, with armbands, without wanting her mother to hold her. Pugsley doesn't try, but he will jump in, then plod round to the steps and come back to jump in again. The three children and their mothers are talking of going swimming tomorrow afternoon, while the Sage and I (and Dave) are bricklaying. I had an earnest talk with the Sage this morning - no, we don't generally row. As Dave discovered, to his startlement one morning, my explosions are usually brief and while the Sage isn't there, so I can be pleasant when he is. And I certainly appreciate how busy he has been; nevertheless I was able to cite similar projects where he has got to and beyond the point of no return and them left the job to finish at some time in the future. He took my point. Indeed, he's very fair in these matters, once faced with irrefutable logic and no chance of turning the conversation to a sideline. I don't underestimate that quality.

We'll be seeing a lot of Weeza and z this week - they're coming over in the morning and again on Thursday, and then the Sage is going over to her house on Friday and they're going to call on the Sage's sister as it's her birthday. She lives up in Cromer. My children are very fond of her - her own children are a lot older than they are, being 47 and 45, and she enjoyed having small children to do things with; and then hand back, I daresay. She'll be 77 on Friday. She really doesn't seem to have changed much in decades, still as much fun as ever.

I didn't say yesterday - I forgot to mention, that is - that it was Al and Dilly's wedding anniversary, five day's after Weeza and Phil's (though a year apart). Darling children.
Posted by Z at 7:47 pm

to have darling children is a blessing indeed

You haven't mentioned before that your daughter has been married twice. I see from your sidebar that her current husband is called Phil.

It is indeed, ILTV. I didn't quite realise, when they were actually children, that the best part of all is when they are grown up.

I have lots more lovely stuff to look forward to then!

Oh yes - remember how hard it all seemed when they were little, but that was nothing compared to them being teenagers? Well, it's the same between childhood and adulthood, but in terms of pleasure instead.