Bringing on the wall, Day 23 - Z finds herself in the beer garden

We were unsure of the weather so Dave came in the afternoon instead of the morning - by which time it was pretty hot again. Not so humid so we had more energy. I went over to fetch Weeza (my daughter) and Zerlina because they were carless, Phil having taken the car because of the train strike. So the chaps were already working when we arrived home. Little z was ready for a nap, so Weeza joined in bricklaying.

Tilly (the dog) came past, limping heavily. I went to look at her leg, but couldn't find anything wrong - she was all right later so I think she'd just twisted it. She lay in the shade for a while. Later, Weeza found fleas on Tilly's tummy. I'd had a look earlier and she was all right, so she must have picked them up lying in the garden. The Sage sprayed her with stuff. I'll go back to the pet shop tomorrow and discuss the matter with Val.

Later, Weeza, z and I went for a walk round the village. As we rounded the corner towards the pub, Weeza wondered if it was open? "Not at 4 o'clock," I doubted. However, it was and its siren call was not to be resisted. z has a liking for blackcurrant juice and fizzy water, and we had John's home-brew. We didn't tell anyone - it was our girly secret, Tee Hee.

I had a little discussion with Weeza and Asked Her Advice - well, I knew what her advice would be but I wanted to run some thoughts past her. Anyway, she was very helpful.

I cooked dinner for everyone tonight, so that Dilly wouldn't have to bother as she was out all day and then tutoring - you'd think the children would be allowed their summer holidays but no, their parents make them keep up the maths throughout August. So she didn't have time to join us, but at least Al got a meal. Now, they've gone off to Norwich, she to see a friend and he to finish last night's work. The Sage is minding the children right now and I'll take over in a few minutes. I'm talking to Ro on MSN at the same time as writing. There is a highly annoying mosquito dive-bombing me as well.

Anyway, the wall. Here we go, progress to date - 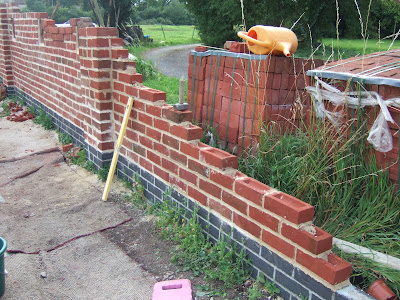 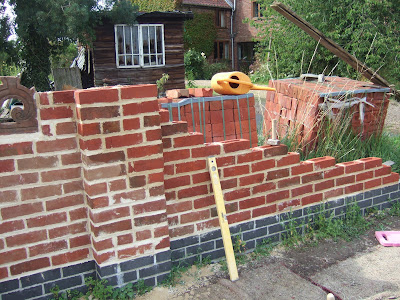 My dogs do the same thing when they get muscle pulls/strains. One of them is a drama queen and carries on, until she realizes you aren't paying any attention.
Zerlina Buttercup almost a year old? Already? Time does fly.

We had a dog like that when I was a child, but we used to play up to him and sympathise in an exaggerated way. He loved it.

I know, time does indeed.

I have nothing to add.

Nothing at all? Oh. Good morning, Dave.

That Vince is a bit annoying, isn't he?

At least Vince sometimes leaves messages that indicate someone's read the post - he's better than some spammers. I'm still not clicking his link though.