Bringing on the wall, Day 25 - we go Round the Bend

An event of some significance this afternoon - we reached the corner and Dave exuberantly went right round the bend. Actually, we had rather doubted that we'd get any building done at all today, when we'd looked at the BBC local weather forecast but, bearing in mind its usual level of accuracy, we decided to go for it. Indeed, the BBC still shows light rain right now, although there's been none all day.

Dave worked particularly hard, first laying one of the ornamental bricks and filling in all around it for stability as the mortar sets, and then moving down to the corner to start on the pillar so that I'd have something to build to. Afterwards, he took photos with his super-duper wide-angled-lensed camera, though he couldn't get far enough away with nothing in between to get the whole length of the wall either. He'll put up his pictures at his place - I may pinch a couple of photos and put here, as they will undoubtedly be better than mine.

Here are today's photos - I built from the hammer towards the corner, Dave did from the pillar on the left to beyond the ornamental brick, then the corner footings and the start of the pillar. 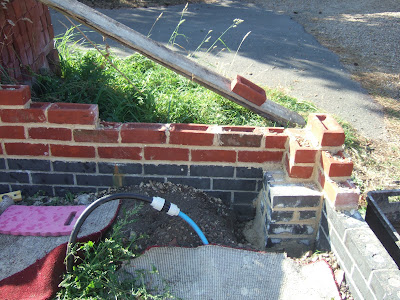 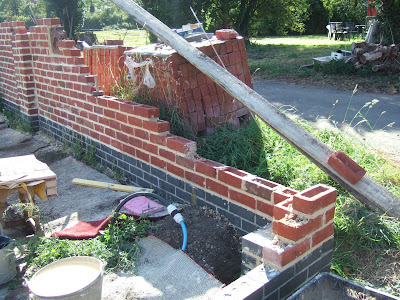 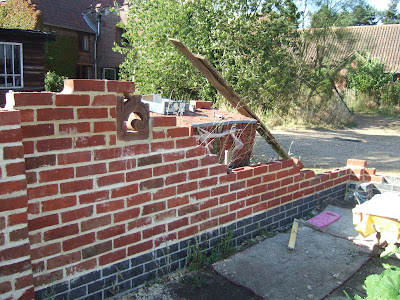 Dave being a man of charm and total good-nature, offered to come along on Bank Holiday Monday for a final go before he leaves for his holiday. I'm not sure how to tell Wink that some of her precious long weekend here will be spent bricklaying - wait, she reads this blog every day, so I already have. Wink, this will give you an opportunity to lay a few bricks yourself, and it'll only be until noon and then we'll stop for bacon sandwiches. Bring old clothes.

Of course, August Bank Holiday usually brings rain, so we're prepared for disappointment, but that doesn't stop us looking forward to Day 26.
Posted by Z at 4:38 pm

I'm not planning to put up all the photos I took (you and the Sage appear in the distance in some, and being a model of discretion I shall omit them).

All this is looking very promising and shaping up nicely, Z...can't wait to see the inspirational planting... :)

Come for a breather amongst my poppies...

You are indeed a model of most things, Dave.

Next time, I'll take a picture from the other side where the flower bed is to be - it's still got several piles of bricks on it at present but it'll give an idea of the area (and how much work is to be done there!). I'll be over. I love poppies - I suppose you cut them down after flowering to be coming again at this time of year?

So now you have sent Dave 'around the bend' poor man. The wall is looking good though

I drive all men round the bend sooner or later, LOM. Still, they enjoy it really.

Hope the Bank Holiday weather is good for bricklaying.

Bacon Sandwiches??
Now I know you aren't 'a bit of a porker,
Cannibalism is frowned on even in Norfolk.

Unlike incest and folk dancing of course...

Vegetarians and vegans catered for at all times, of course. And even teetotallers, with slight bemusement.