Bringing on the wall, Day 26 - Wink Joins In

Dave was late!!(!)* This is pretty well unheard of, but I supposed that perhaps he had spent some extra minutes preparing his mother's breakfast and that he'd been running around like a busy person to catch up ever since. When he arrived, only ten minutes later than usual, it transpired that there was another explanation, but you must go to him to find it.

I made tea (two Earl Greys without milk, one Earl Grey with milk, one Indian tea with milk) and we got started. The first bucketful of mortar was a bit wet, so I ladled it on to a run of bricks so that they would absorb some moisture by the time I wanted to lay the next course of bricks. This proved to be splendidly quick and effective and I got on well. Dave concentrated on the corner, which is a bit complicated to do. Wink had not, after all, brought bricklaying trousers, so I lent her a spare pair of mine (generously, the summer-weight ones, while I wore the thick jeans with the knee out), but she decided to do some shopping first, so disappeared for a while.

All went swimmingly, and later she returned and laid several bricks herself. This is today's effort 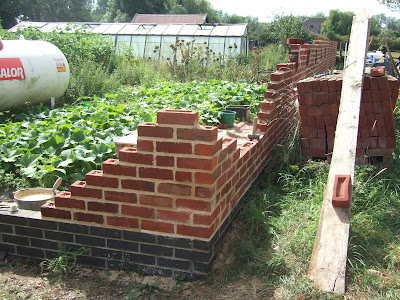 And the corner from the other side. 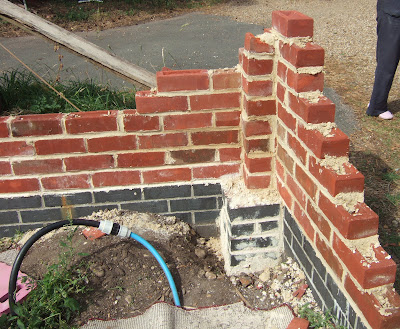 Also, with Dave's permission, here are the wide-lens photos he took last week. Still couldn't get quite all of it in because of a tree in the way

If you compare my first photo with his second one from the session before, you can see how much we added today. These pictures, taken from his blog, don't enlarge and they do look good embiggened (as Pat puts it) so here's a link to the original where they do.

Later, we ate bacon sandwiches on the lawn, which have been requested by Dave for some time (he also asks for cake during afternoon sessions, but he hasn't been lucky yet). The Sage was accompanied on one side by Tilly and on the other by his favourite bantam. He fed them both bits of toast. Then I fed them bits of toast. Dave left to go and tell his mother something she wouldn't want to hear. We sat in the sun on the lawn and drank another glass or two of wine. Later, Wink had a little nap (she's on holiday) and I went and filled the car against the fuel increase tonight and then came home and prepared dinner. We'd invited Al and family round for a barbecue.

While the food was cooking we ate smoked salmon pâté on oat cakes, artichoke hearts in olive oil, black olives and breadsticks. Squiffany hadn't eaten artichoke hearts before and gave it a try "I don't like it - wait - I do like it!" She accepted another, bigger piece. The meal went very well, everyone enjoyed all the food and it was a jolly, convivial evening in the last of the sunshine. We were joined by chickens again and gave them pieces of oatcake. Only one will take food from your hand, and she lets the Sage pick her up too. He gave her to me to cuddle and she let me, though she was being polite rather than enthusiastic so I didn't test her patience for too long.

Then several of us went to Fairyland by train, and then the rest of us went to London - Squiffany being the train driver in each case. Eventually, as it was becoming dark, they went home to bed (well, the children went to bed, I daresay Dilly and Al didn't) and we came in for coffee.


*If anyone wonders why the brackets, it's because the divinely splendid JonnyB claims full rights to three unadorned exclamation marks and I am a respectful blogger.
Posted by Z at 10:38 pm

I don't think I apologised for being late, did I? I am sorry.

A touch remiss of you, but entirely pardonable in the circumstances.

I think the Z 'n D thang is way cute.

Thanks for great comment earlier. Always most welcome over at my place!

(I'm quite comfortable with working man-hours, of course)

Dave and I are cute together, it's true, with or without cake. Are you watching Dave's waistline, Sarah?

Everybody has a family tree. You seem to have a family tree and a family wall. Hasn't every family member contributed to the brick wall construction?
Tell Squiffany to drive the train here and come get me. I'll come help. Oops wait-forgot about the ocean!

I don't think Al or Dilly have yet because they're always working or looking after children.

Oceans are no barrier to Squiffany's train, she'll be with you in a trice.

Just let me know her ETA so I'll have the kneepads, gloves and mason trowel packed.