Z is proud of the Sage

I got up before 6.30 this morning, to be ready to leave with Ro an hour later. Blimey, such an hour should not be counted part of the day at this time of year.

This morning I spent at a lecture on Lowestoft china (very good and interesting), then had lunch with the lecturer and after that friend Alan dropped me off at Weeza's house. He came in to say 'hello' and Zerlina politely gave him a lovely smile. She is very happy and smiley at present, sleeping awfully well (the more she sleeps, the better she sleeps and the more active she is when awake) and very responsive, particularly to her mother. You may have noticed, in the picture I posted a few weeks ago, how adoringly she looks at Weeza.

Then they dropped me off in the city centre, where I met Ro, we went to see the Bond film and came home, to a jubilant Sage. He has had a double-page write up in the Ant1ques Tr@de G@2ette, with 10 photos - my photos. I'm proud. I'm a professionally published photograper! Unpaid and uncredited, obviously, but hey. The appreciative and detailed article is a real credit to him and I'm far prouder of him than of my pictures, of course. He seems to have committed himself to three sales next year, instead of two - he certainly has enough entries. He already has enough confirmed for the April sale and promises of china for one in July as well as the usual autumn one. 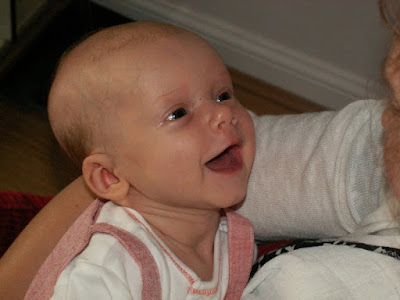 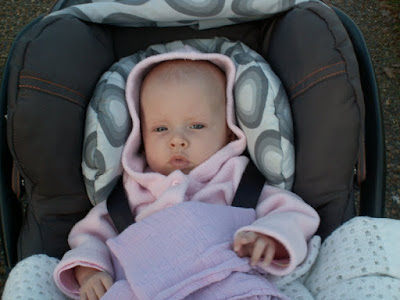 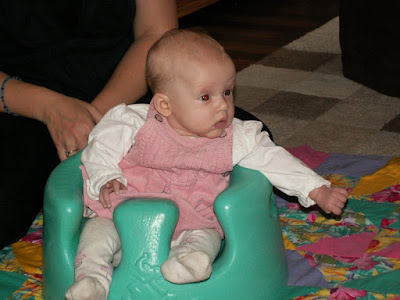 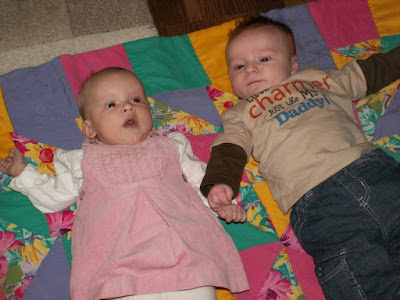 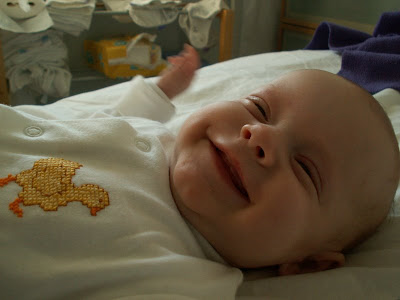 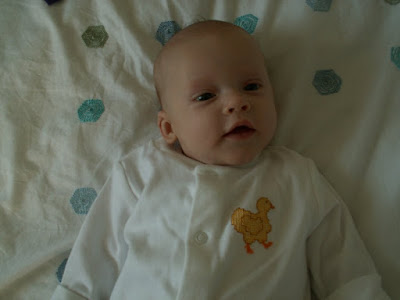 The pictures have me on the verge of tears. I love babies and Zerlina is a particularly adorable one. I forgot what you wrote about as soon as I saw the first picture.

The little boy is the son of Weeza's best schoolfriend - they are lucky enough to live only a few miles from each other.

My fave is picture number two. And is it me, or is she looking a lot like her dad in the last two pics?

You can never have too many pictures of a baby, that's what I say. Lovely.

I like the carseat photo. Zerlina looks like she is on the verge of sending a kiss. Dandelion is right-you can never have too many photos of a baby.

If I'm not mistaken, picture 2 is Blue Steel...

she is such a buttercup!! God Bless Her.. and she has so much love in her eyes.. even in pics where she is not with her mama.. :-) The pics make my day today. Thank you!

I've had pictures published - and been paid and been credited for them too (I used to do a bit of freelance work a few years ago).

You may recall my photo in the EDP two years ago, when my house was flooded.

Actually, you probably don't recall it, as you weren't reading my blog then.

Oh Z, she is beautiful. Almost makes me want another one....almost...but not quite, I shall satisfy myself with pictures of the gorgeous Zerlina.

Seriously, Dave is there no end to your talents?

Oops, and I meant to say well done to the Sage for the article and to you of course for your photos but I was distracted by baby pictures.

I will rush into Eastbourne to try and get a copy of ATG, hope they have it down here...... Lovely baby.

I think that the ATG is subscription only, Martin. The article may go into their online archives later, but it's not there now.

I don't have any ambition to be a photographer, Dave. I'd never owned a camera until a couple of years ago, which is why I was unnecessarily excited.

She looks really adorable. I like the way she looks to be nearly holding hands with her "boyfriend"!

Yes, she does doesn't she? He has a baby sister too and they all see each other every week. Having just moved here from London, it's good for Weeza to have a close friend living nearby.

I know, it's hard to think of even our 3 and 2 olds like this. She's different from all of the rest of the babies (mine as children too) as she is built on the daintier side then they were, so looks tiny to be so expressive and capable.