Little Old Me wants me to do this -

I've gone for my iPhoto file, that I have started to use since my computer failed me back in the Spring and worried me that I'd lost all my pictures. And here is the sixth picture of the sixth folder. 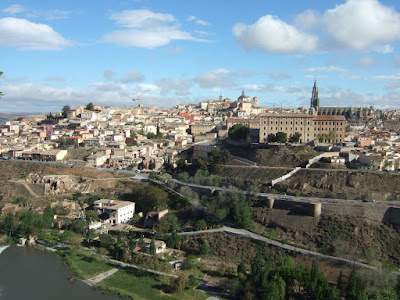 It's one I took during my visit to Spain. On our last day we had an excursion to Toledo and, on the approach to the town, the coach stopped for us to look at the view and take pictures.

I'd rather expected Toledo to be very touristy, but it was lovely. Narrow streets - they really should ban cars altogether from many of them - and although there were a lot of shops aimed at tourists, it was not brashly done. Most of those shops had displays of knives, Toledo being well known for making knives, swords and suchlike. I can't imagine they do any trade with people who have travelled by air nowadays. Other shops had models made of marzipan, the other local product. I bought a little cuddly toy for each of my grandchildren in yet another shop, including one for Zerlina. Since this was several months before she was born and it was the first thing I bought for her, it was rather exciting to include her in my souvenir shopping. We had lunch there and then all wandered back to the main square before rejoining the coach. It was a lovely sunny day and most of us sat on walls or benches eating ice-cream.

Ooh, don't know who to tag. I'll come back later, but in the meantime, if anyone would like to volunteer...

Here we go - I think you're all people I haven't previously tagged. Of course, no obligation, but actually it's a particularly easy one and rather enjoyable.

I haven't time to link now, but I will, and tell you lucky people too that you've been tagged.
Posted by Z at 10:36 am

I'm sure the children would have preferred knives.

I'd have liked one. Though a Swiss Army knife is more useful, as it can include a corkscrew.

I don't give knives to children before they are 5, then they are put in charge of the cooking.

that's quite a sweet tag. and a nice memory.

Nice photo, I haven't been to Toledo, it looks lovely.

Will you all do it yourselves then, please?

It's certainly an unusual idea and you've produced an interesting post.

Sure. Thanks for thinking of me;D

Excellent - sorry I haven't told anyone yet, or linked. I'm really distracted with daily Stuff.