Another day of getting things done, quite remarkable.

When our mother died ten years ago, Wink and I dealt with clothes and personal papers straight away.  However, she had a lot of clothes and didn't have enough room in her wardrobes (several of them) for everything, so used to have a seasonal switchover, taking those that were temporarily redundant up to the attic and hanging them there.  Since she died in March, her summer clothes were still there, along with quite a lot of books and various other things.  We didn't deal with those, there was too much else to do, and once Al and Dilly lived there, they changed the use of the dressing room to a study and put in various pieces of furniture that made the extending ladder to the attic inaccessible - there's another attic too that they were able to use.  So all those clothes and everything else were still there.  Now, while the annexe is almost empty, I want to clear the attics and so today Wink and I made a start by bringing those clothes down.

There are a few jumpers that Wink has taken away to try on, a couple of things I might, and the rest has been divided into two piles, one for the recycling bin by the village hall and one for a charity shop.  There is only one dress where we were hit by sentiment, and that's the one she's wearing here, at the Sage's and my wedding party.  She's second from the right, in pink. 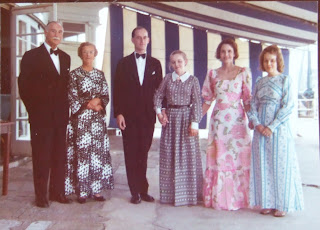 A few of the clothes we couldn't remember her ever wearing and wondered why on earth she'd bought them.  One, we suspected that Wilf, our stepfather, had brought back from a business trip abroad because it was brightly coloured and pattered and pretty well shapeless, and we couldn't imagine her choosing it.  But almost as odd was this extraordinary outfit - 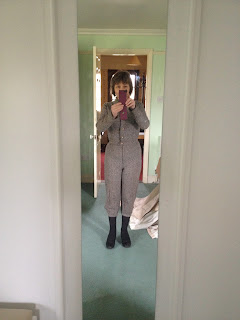 As you can see, it's tight on me, so I'm sorry to inflict the photo on you (I'm sure that thick tights add at least a centimetre to one's thighs, aren't you?), but that's not the worst of its crimes against fashion.  And she never wore trousers of any sort, she didn't like them - that is, she occasionally bought them but only wore them for walking the dog in very cold weather, and this outfit was certainly not a dog-walking set-up. 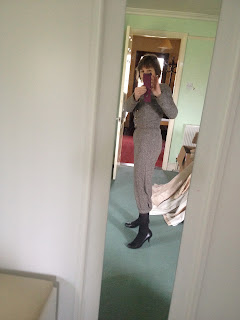 I guess it dates from about 1980?  Why did she keep it?  It was in a bag, not hung up, but even so.  It reinforces my opinion that sizings have changed considerably over the years, by the way.  Size 12, it was marked as a 24 inch waist and 36 inch hips.  A current size 10 is roomy on me and this is a good size smaller than today's 12, I could only just do it up.  She and I were much the same size in those days, which is a few pounds less than I am now, but she'd never have worn anything so clingy.  Nor would I have worn it, except to poke fun at myself.

We went to the pub for lunch, first having a drink in the bar and enjoyable conversations with a local chap and his son-in-law, then ate excellent roast beef.  Then our friend called round, having borrowed his brother's Transit van and Wink and I went with him to Ro's house, where we loaded it up with all the stuff he's cut down from his very overgrown garden.  The big van was stuffed full and I was nearly overcome by exhaustion at one point - the weather has suddenly become hot and I was dressed in jeans and a cashmere jumper when I'd have been better off with a t-shirt, working so hard in that weather.  Anyway, we did it and Wink left to go to Weeza's house while we came back here and dumped the branches and undergrowth on the bonfire to be burned when the wind is in the right direction.

A strange piece of clothing. Are you sure it is no kind of undergarment?

That is one very odd undergarment. It looks like an old-fashioned flying suit. Or some sort of stylish uniform. You should put it on Facebook, someone might shed some light on it....

She might have worn it under the garment my stepfather bought her, which was so huge that no one would have noticed.

I don't think I dare put it on Facebook, Nick, local people read that and they'd point at me and laugh.

As you can see from the first photo, she was taller than I am (at that time, anyway) and I suspect the breeches came little below her knees. She was, at the time she bought the outfit, nearly the age I am now, which - well, words fail me.

Definitely keep your Mother's dress. It is gorgeous! As for the odd outfit-my first thought was "she really should get a pith helmet and some boots and pose next to Bobby".

p.s. The large dress you found might have been in the style popular in the 80s called a tent dress.

I read that the better stores have sizes that are larger than normal – I mean a size 10 is more like a size 12, because they want their customers to feel that they are slimmer. But here in the US women have become larger, taller and bigger. Thanks for coming to my blog.

Clothes sizing has definitely changed. In the last 18 years, I have put on about a stone in weight, but dropped 2 dress sizes.

The pink dress is quite beautiful.
We embraced our femininity in those days and trousers - or slacks as we called them - would only be worn in a sporting context -sailing and climbing.

I keep on trying to put myself in her place, but am failing dismally. My first thought was late 70s/early 80s, and thinking it could be useful for playing golf in at that time. Maybe she was thinking of taking it up? I have distinct memories of plus fours being fashionable around that time but can't pinpoint it exactly.

Replace the heels with hobnail boots, add a flat cap and the role of Chimney Sweep 3 in the remake of Mary Poppins will, assuredly, be yours.

Cor Blimey and lawks a-mercy Guv, Sir Bruin done got it and no mistake.

Of course, an English size 10 is an American size 6, Vagabonde - and yes, better shops are more generous with their sizes and always were. Waists are certainly bigger in proportion to hips now.

She never considered playing golf - I really do have no idea!

Rog - that was pretty well exactly what I was going to say!

I don't know what to say about that grey outfit. I had some peddle-pushers myself in the early 80s (blue velour ones and a frilly shirt to go with them), but I was only a teenager then.

There was a 're-sizing' of British womens' clothes sizes about 20 years ago. If memory serves, the reason was because the original sizes dated back to the 1950s when women were a somewhat different shape. This means that I was a size 12 back in the late 80s when I weighed seven-and-a-half stone and yet a stone-and-a-half and 25 years later, I'm still a size 12.

Exactly, a teenager - my mother always dressed appropriately; conservatively if anything.

It's quite nice to be the same dress size as we were in our teens though, isn't it? Even if the sizes have changed with us.

Speak for yourself - I have acquired a '1' in front of my size!

I've lost more than two stone, Jane, in the last five and a half years. I was a 14 for a while.

Ann says JaneRowena has a point. Ann had a pair of green cord knee breeches around 1980 and wore them a good deal. She thinks there was a short lived fashion for breeches at that time.

There was a fashion for velvet evening knickerbockers worn with a white ruffled shirt I remember - I read a rueful article by a columnist in a newspaper at the time: she said she'd turned up in this outfit at a party, only to find almost every woman dressed identically. But my mother was a lot older than Ann and a knee-breech suit was so unlike her.