As predicted, I was awake most of the night again.  Pah.  At 4.30, I was writing an email to Martina, having given up on sleep altogether, though I did have another couple of forty winkses after that.  And I had a rather disturbing dream, one of the sort that, every time you drift off for ten minutes or so, you go back to and carry on with.  I won't bore you with it, don't worry.

At about 10 o'clock this morning, I had a horrible shock when I realised one of my earrings was missing.  The ones I wear most of the time are gold studs with a little diamond chip in, but it so happened that I was wearing the diamond ones that Weeza gave me for my birthday once - I think it was my 50th.  It was a lovely and generous present and here they are, though rather blurred - they're set in white gold. 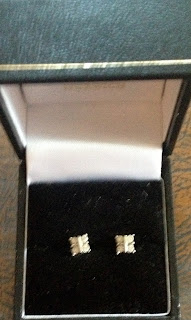 They being studs, I hadn't taken them out last night. To start with, I thought they must be in one of the places I'd been this morning - that is, my bed/bedroom, the landing or bathroom, the stairs or hall or the kitchen or study, and the Sage and I searched.  Then I started to worry that I'd lost it yesterday.  I couldn't remember whether or not I'd touched them at any particular time.  I went to the supermarket, petrol station, walked round the village and so on.  Or if it had fallen off in the bath, it might have gone down the plughole.

You'll understand my distress.  And Debs and Fi, the cleaners, were coming today - so I left a note asking them to look carefully and to empty their vacuum cleaner both before and after use so that I could check through the contents.  And then I had to go off for my lunch in Norwich.

Betty was feeling a bit fragile, but determined to go to the lunch.  I and another friend, Janet, parked at her house and she'd booked a taxi (she's very generous, there was no question of offering to pay for that or the lunch).  We were greeted with the offer of wine, went through for lunch with about 35 others at 1 o'clock and it was, as expected, a quintessentially English meal.  Starting with Norfolk asparagus, then roast beef, then apple pie, and excellent it was.  More wine, and I thought it'd be okay to have a glass, I wouldn't be driving for at least a couple more hours.  I didn't expect the port though.  Decanters were put on the table (passed to the left, obv) and - well, what the heck.  I toasted, in very small sips, the Queen, St George and someone else - maybe it was the dragon - obediently with the rest, and then drank black coffee.

When we were in the taxi again, I checked my phone and found that the Sage had tried to phone at 1.30.  That seemed a hopeful sign so, as I was leaving Betty's house just before 4 o'clock, I rang him.  And the earring had been found, under the rug in the bathroom in a crack between two floorboards.  I passed the news on to Janet - I'd tried to put the whole thing out of my mind: I'm used to compartmentalising, but I had told her - and she was so pleased for me that I cried with relief.  Just for a moment, doesn't do to get emotional.  By the way, going out and being sociable did Betty good, she was very cheerful and chatty, though I expect she'll be tired tonight.

And this evening Al, Dilly and the boys came for tea, Squiffany being at Brownies.  It was a jolly little party and they're coming again for Sunday lunch, when we've got some other people coming too.   I think there will be eleven of us, so we'll all fit round the table (unless more of the family decide to come, in which case I'll have to add another table).  No doubt I'll tell you about that later in the week.

Oh, and a couple more things have been ticked off the outside list.
Posted by Z at 7:45 pm

I'm very glad you found the earring. Why is it always worse to lose ONE of a pair (of anything)?

I have a box full of lonely single earrings. Someone should start a dating site for matching them up. I'm so glad you found yours, though.
All earrings are special, but some are more special than others.

We should go for the single-earring look, perhaps. Or odd ones, like socks.

Well, it proves the cleaners did a more thorough job thean perhaps you thought they do!

Glad to see Red Rose Day is alive and well - if only in Norfolk.

Hadn't realised that there was local asparagus around yet. Must pay my local grower a visit next week.

I very rarely wear a matched pair of earrings as I have so many singletons. I've started making my own to try and keep up.

They've only been once before and they were certainly thorough then - and I did ask them to search carefully as a priority over cleaning. I emailed their manager afterwards to send thanks.

I suspect the asparagus was grown under fleece, it seems rather early in view of the weather we've had. But the menu said Norfolk asparagus, so it must have been local.

It's the ones that just hook in that I usually lose, which is why I generally wear gold studs during the day. I've managed to keep my (low quality) sapphire and ruby ones I bought in India in 2000 though.