It's been a productive day.  I only had the hymns for today's service first thing this morning, so decided to wing it, except for not recognising one of them at all - nope, didn't know it, but hey, sight reading is how a lazy person gets by.  So I did.  Then I spent some time taking photos of all the lots for the next sale in June - since them I've cropped and occasionally straightened them and in one case edited - there was a lot number on one from the last time it was auctioned (it's surprising, the number of collectors who don't take them off, nor even wash the china if it's dirty) and neither of us noticed.  I'd put everything away ... so simply edited it out.  Everything has a full description of damage and restoration, I hid nothing except a sticky label.

The greenhouse has been demolished and the brambles all removed.  Next, the wire will go up on the side and a half of the veg garden that has neither wall nor greenhouse, then the chooks can roam.

And this afternoon, Hannah and Sam brought young Rupert to visit.  He is adorable!  Absolutely as delightful as he looked in his FB photos.  Ben was hopelessly overexcited to start with, so in the end we took them both outside and they had a whale of a time.  Although Roops is tiny compared to Benj, he wasn't at all afraid and they romped about.  When Rupert was chasing Ben was the funniest time, but I was laughing too much to think of taking pictures.  But here they are together. 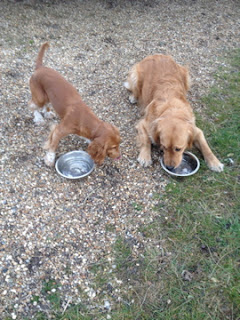 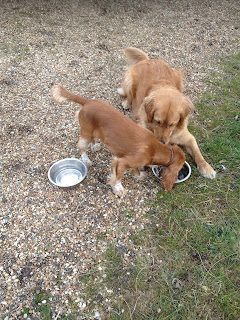 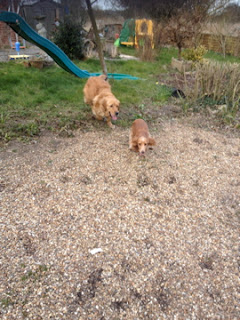 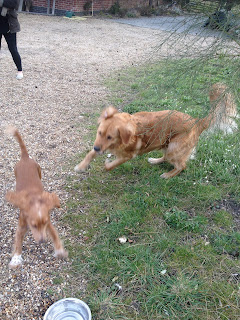 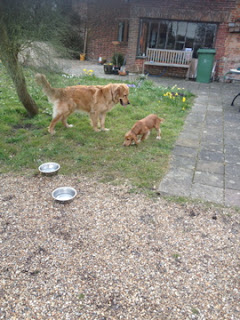 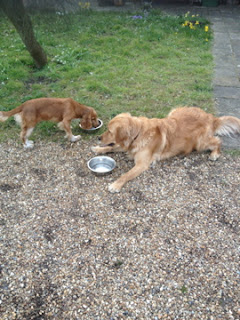 Rupert is 8 months old now and will come here at the end of July for a couple of weeks - I expect we'll have Ben until the end of this month at least.  This is such fun, though the house is a complete shambles.  Still, it doesn't matter, does it?
Posted by Z at 10:22 pm

What joyful pix of them playing chase. I especially like the fifth one.

Can I be a puppy, please?

It was brilliant, Ben tired first - he had to pretend to be thirsty and lie down for another drink.

Yes Tim, that would be marvellous - you don't mind taking over the best chairs while I sit on the floor, do you?

Oh you know how I love pics of the dogs!

Won't you be sad to se him go?
The bonus is that when the post cupboard is dry everybody loves doggy shots.
Not that your cupboard ever seems to be dry:)

I know, Martina, I was thinking of you in particular when I took them!

Yes we will, Pat, though he only lives 300 yards away and we will see him. I think it'll firm our decision to have another dog, and I've a feeling it will be a puppy after all. Preferably one that won't grow as big and strong as Ben - I'm not sure how my friends have managed! I'm a seasoned dog owner, it's been easier for me.

In my next life I shall be a dog in your house.

It'll have to be my next life too, BW, I'm a lot older than you are! - thanks for the compliment xx