I make no attempt to disguise it: the Sage and I are no end pleased and flattered that you want to come to our party.  You are all most welcome - it's you lovely people who make it fun, we just provide the venue - and a lot of food.

Today was a bit frustrating.  I went to a lecture on Freud (the artist, not his grandad) and Hockney and then trotted along to Jarrolds to do a bit of shopping.  I wanted some new boots because my long ones' zip had broken (that is, two boots, one broken zip).  I tried on a lot and eventually bought these* (no pic posting problems on Safari, though I understand those unfortunates who still use IE have to go round the houses) though they weren't exactly what I'd been looking for, but were gratifyingly well reduced in price, fit perfectly and - well, I need new boots. 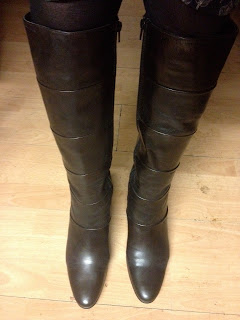 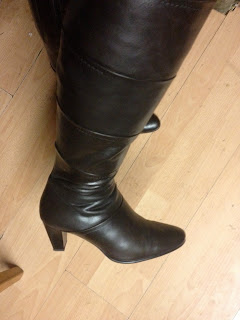 It started snowing while I was in the shop and by the time I'd finished I was only five minutes short of that hour's deadline in the car park, so I didn't buy the books I'd planned to (book token for Christmas!) and headed back.

Darlings, I soon discovered that there was a problem.  Everyone was leaving Norwich early because of the snow, and Grapes Hill was closed - it appears to have been a scheduled closer, presumably because of roadworks and no one was undaft enough to open it again.  I ended up several miles in the wrong direction on the ring road, my least favourite road in the world (and I've spent hours stuck on the M25 and various other motorways) and I finally arrived home at 6.06 pm after a journey starting at 1.25 which should have taken half an hour.

But I am a positive and uncomplaining Z on the whole, and I took time to notice how pretty the trees were 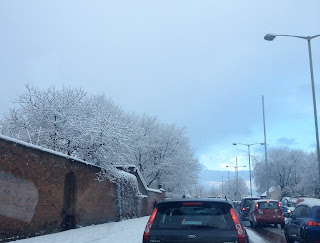 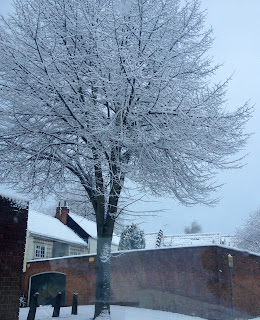 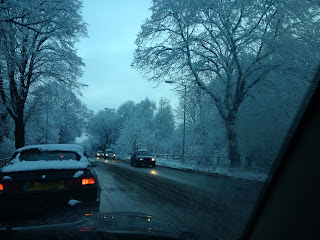 I was, of course, stationary at the time I took the photos, as I was quite a lot of the time.

I also observed, as so often before, how lovely people are.  No one lost their temper, no one hooted a horn, even when someone was blocked from going ahead by a car that had space to move a bit and leave room, people paused to let someone in front or out of a junction.  I stopped to let three young women and an older one cross the road - the ice was treacherous and the older one fell and the others hurried back to help her up and walked on arm in arm.  Lorries lost traction, but fortunately everyone took great care and I saw no accidents, which was remarkable.

Have to say, though, what a stupid situation.  I've no idea what (apart from not shutting Grapes Hill) could have been done, because sending traffic control police out would have been a danger to them.  I have no plans to go far for the next few days until the very English winter weather eases.


*Looks like fat calves and tiny feet.  Neither is true - put it down to foreshortening
Posted by Z at 8:08 pm

Heard about the bad situation in Norwich and the A140 on the radio this evening, thought you would be snuggled around the fire in the Zedary.

Pleased for you that you returned without mishap, time to read, plan the menus for the party, and have a nightcap without worrying about drinking and driving the next day.

May we be one of the first to confirm our attendance at the party please?

Absolutely, so pleased you can come. I've still got a cake tin of yours from last time by the way, remind me to give it to you.

Will there be music? Kinky Boots for example? ;)

Trees look very Christmassy !
It's a good job there are no hills in Norfolk, that's all I can say

Beautiful boots - I'm afraid that I am very low on boots too, but am too depressed about it to go shopping for more. (Loud sobbing noises here.)I had a crate of winter boots in the bottom of my coats wardrobe. In it were laid a pair of brown, a pair of navy blue, a pair of black, a pair of aubergine. The mice got in and had a party. The navy blue were suede,full length and sheepskin-lined, and they munched it all up and made nests in the other pairs, all of which had holes nibbled in them. So this year I am existing in a pair of £25 boots from Sainsbury's.

What a horrific journey - I would be petrified in case I ran out of petrol. I would also be very lost as I don't know the area at all well.

I promise not to play my clarinet, but you're welcome to examine the contents of iTunes, Singing Postman and all.

The gentle slopes of the ring road were too much for some of the lorries, Rog. I was led to exclaim Far Kennel! more than once.

Oh, JaneR, that's dreadful. What a horrible shock when you found them, and the little beasts didn't even have the excuse of winter, because you wouldn't have had the boots packed away long enough then.

It was tedious, that's all, and I'd filled the tank the day before so that wasn't a worry. I didn't know where I was for a while, but I knew I'd get on one of the roads radiating out to the ring road sooner or later. The roads were equally busy in both directions, even going in to the city.

Totally agree that trees covered in snow are beautiful (though best admired from the comfort of toasty surroundings indoors!)

Nice boots! Gorgeous snowy photos too. Shame about your crappy journey though.

The journey from hell! Bringing back bad memories from winter 2011 here!

How's Norwich getting a worse time of it than the north???

Excellent boots - they look as though they will carry you anywhere. what slim legs you must have - and tiny feet!

Yes please! both of us would love to come to the party. Of course it would be lovely to stay with you again but if it's more helpful we'd be happy to B&B.

I'm expecting/dreading something similar happening on my twice weekly journey to and from Oxford any day. So far I've been very lucky to miss the accidents and delays but I have coffee in the car with me and extra layers just in case. I do like your photos of the snowy roads.

I went for an invigorating walk across the fields this morning Lola, it was lovely in the sunshine though very cold.

Ro said it took 2 hours to get the 6 miles home yesterday. I trumped his 2 hours and raised it 30 (rather than the 16 it should have been). I think I've mixed whist and poker there. Hmm.

I know, Macy, very odd. People on Twitter and FB were posting the temperature this morning - Leicestershire was -6 and here was -11

Slim legs, no one's ever said that before, Mig, no wonder I love you. Feet are size 5, dead average. And that's brilliant, lovely that you and Barney can come and of course you must stay, we've got even more room than last year. I just wished that I'd had lunch before setting off yesterday, a small bowl of muesli for breakfast was all I had between 8 and 6.30, apart from a few sweets I had in the car.

Very handsome boots. I recently bought new ankle boots just cause. Well, also because they were cute and a good sale.

They're so comfy, Zig, I don't do less than comfy nowadays