... but I refuse to grow up.  So I still make a snowman every year, if possible.  I've had to do it all by myself since Ro left home, which isn't as much fun, admittedly, as having company, but no matter.  I've got my inner child to keep me company, even if she's no damn good at building snowmen and I have to do all the work.

And here it is - The Anonymous Snownudedude 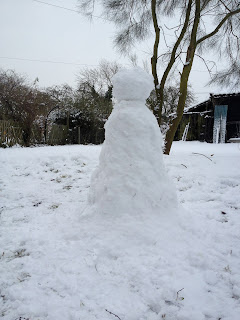 Apologies if you've already read this on Twitter, but the other momentous event of the day was having a snowplough come through the village.  I'm vastly impressed.  We pay the best part of £2,500 a year in Council Tax and I think we've just got our money's worth, for this month at any rate.  Not that it came down our road, but no matter.

I sent off my booking form for the Aldeburgh Festival a couple of days ago - I have indeed booked for whatever took my fancy - well, except one thing.  In commemoration of Benji Brit's centenary, they're performing Peter Grimes, both in the concert hall and on the beach.  I was vastly tempted to go to both, but wimped out in the end and just booked a seat at Snape.  I think that three hours sitting on a highly pebbly beach with no companion will just make me feel lonely and I don't intend to be in the least lonely.  I'm not going to all six events on my own though, because Weeza is coming to one with me, the Sage to another and we're taking the grandchildren and their parents to the Young Person's Guide to the Orchestra - at half an hour in duration, it's perfect for the little ones' first concert and we can do other fun things the rest of the day - it's near the end of June when the weather is often good.  Or so Blue Witch assures me.
Posted by Z at 5:34 pm

Oh, that's bad luck. Hope it snows in the night.

Five inches here, very unusual.
I trust the snowplough snowploughed. A couple of years ago, one pulled into the Close, turned round and drove out again, without lowering its scoop.

I did St Nicholas for A Level so I'd quite like to hear it again, but I don't think I could make it over to yours for that.

I'm a bit disappointed that your nude is - well nude.

I'm trying to post pictures myself but I'm having trouble with Blogger. Any hints would be hugely useful.

Have just sent my elder son a text. Predictive text gives you 'gay' instead of icy, so beware the roads will be icy tonight end up as the roads wi;; ne gay tonight, which is a completely different

I thought Snape was a character in Harry Potter books.
No snow here, just really frigid cold mornings with frost,then an hour of sun sometime during the day before the sun sets at 4:30.

Blue Witch is right - I am cautious about the date because my husband's school speech day is on the last Saturday of June (sometimes I am wanted also for various reasons), and since we have been up here (almost six years) the weather has been wonderful on that date every year.

Ah,Tim, perspicacious as ever. The snow had already been cleared away and I think he was on his way back to the depot when we saw him - but it had certainly been snowploughed, so I was duly impressed.

AQ, it is a long way to come, but you'd be very welcome.
He sports a natty red ribbon tie now.
Once, Weeza sent me a text saying she was just off for a neck with Kavitha. I thought it was a slang term for a good old gossip until, a couple of years later, I tried to key in 'meal'.

Jane, 'Blue Witch is right' are words that we all use all the time. The rule is, BW is right unless I disagree, then I'm right. Fingers crossed that you won't be required this year.

Anon, how did you get through the spam detector. Damn you.

Sorry Anonymous, I meant the Anon that I've deleted, not you. I forgot you'd commented here, you're most welcome of course. Snape, of course, but Suffolk is rather more downmarket than Harry Potter. I detect you live north of here (clever me, hey?) and I'm wondering if I know you...

We haven't had so much snow for years - at least three, it's quite exciting.
Your snow dude reminds me of an snow mother (earth mother) which I and my flat mates made in our garden when I was at art college. The neighbours were offended by her, um, attributes!
A typical art student/local resident confrontation ensued but it was all ok when she melted.

"Jane, 'Blue Witch is right' are words that we all use all the time. The rule is, BW is right unless I disagree, then I'm right."

I may just have to reinstate the 'Make BW Laugh Award' this week ;)

Generously endowed, Mig? Mine can't boast anything like that!

I'm very easy-going, BW, so if I strongly disagree I'll have a reason. But let's face it, you're nearly always right!