I went to visit a friend today, who was holding a tea party.  Of the eight of us, our hostess is in her nineties, one of the guests will be ninety next April, one is about sixty and the rest, except me, are in their seventies and eighties.  It was lovely.  They are all dear friends and I've never cared about age, I'd have been just as comfortable if they'd been young enough to be my children, rather than a generation above.

I was thinking about our friends Len and Laura.  Wink invited them to Sunday lunch ... they left after breakfast on Monday!  His 60th birthday is the day before my 57th, she has just had her 70th.  They married the same year as the Sage and I did - he was still 22 and she was 33 with three children from two marriages*.  They came, with his parents, to a dinner party my mother held, and someone asked her how old her daughter was - "thirteen" said Laura brightly, not mentioning her older son, or her younger daughter.  The expression on the face of the asker was priceless.  Laura looked quite ten years younger than she was and the answer was completely unexpected.

At the end of the evening, as they were all saying their goodbyes, I heard my mother saying quietly to Len "She's lovely, don't let her go.  You're perfect together."

My mother, bless her, was the very opposite of ageist and so, as a result, am I.  And, to do her total credit, Len's mother, who was a lot more conventional, welcomed Laura into the family too (his father, *Uncle* Bob, was totally easy-going and would have anyway).  Their son is 30 this year and they run a business with their elder daughter - they both look years younger than they are and are obviously still completely united and happy together.

All of which has little to do with anything, except to say that I don't care what age my friends are.

When I arrived home, Friend With Chainsaw was relaxing on the tree, having cut off some more bits, and cleared away the rest of the ivy, which brought home just how massive that trunk is.  If it were anywhere but right next to our drive, I'd say leave it to be climbed on, but as it is, we've somehow got to shift it.  It rather depends on whether or not the main trunk is hollow or not.  It could be a total bugger to move.

Pictures.  Here we go.  Taken on the iPhone.  As you know, iPhone cameras aren't really the point of it.  But it gives the general idea. 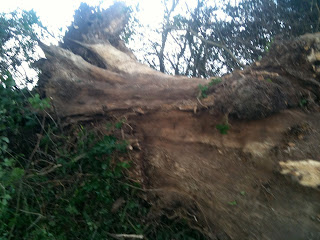 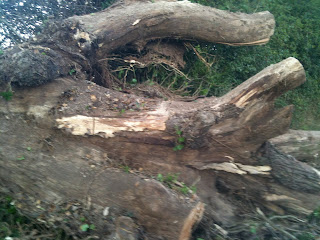 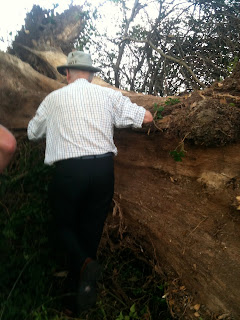 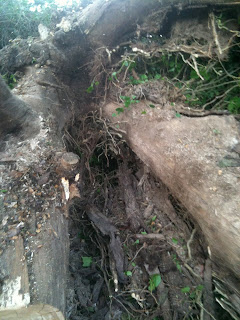 *I know it isn't correct to mix numerical words with numbers, but the sense still comes through, just bear with my bad use of language, hey darlings?
Posted by Z at 9:34 pm

Please say you can get some useful planks from that.

btw - when's your birthday? Mine's on Friday, but otherwise we're the same age - I think. The older I get the more I doubt myself.

I really don't know, it may be hollow. And it's going to be really difficult to shift. If we can, we will. The Sage respects and values wood.

Do you have any farmer friends with a tractor, who could move the trunk somewhere where it could be used as a climbing frame?

In publishing we mix numerical and word numbers all the time - up to ten, it's usually a word, and over ten it's a number.

It's so massive, I'm not sure it could even be moved anywhere useful. It would have to be dragged across the drive, which would probably cut up the tarmac. It's too heavy for a JCB to lift, I'm sure.

I seem to have done that - well, up to or over twenty. I still don't think it's supposed to be mixed in a single piece of prose, though.

Can you roll it to a place and then cut it in parts there?

It's in the middle of a hedge - it's not round enough to roll and even if we got all the branches off, it's too heavy. I'm not being awkward - it is! The Sage reckons the tree was about 300 years old, the diameter of the trunk is 4 feet or more and, unless it's quite hollow, it must weigh at least a ton.

Z, we'd love to meet up. Can we take the details off-blog (is that a real phrase?)?

Do you have my email or phone number?

If it's still the bt one I do. Easiest way to find out is to use it, so that's what i'll do.

Thank God that nobody was hit. So you must lift it.