Al has an unexpected day off

Al was woken by a phone call from the delivery driver, who had arrived at the shop to find that the flat above the gents' hairdresser opposite was on fire and the road was full of fire engines.  Of course, he couldn't get to the shop to make his delivery and Al, realising that he wouldn't be able to open up this morning, asked him to take everything back to Norwich.  He got on his bike and went in to find out what was going on. 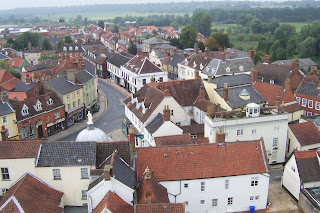 Here's a photo I took from the church tower a few years ago - it's the right hand side of the white building in the foreground.  The flat is badly damaged - it's the one next to where Badgerdaddy used to live, and the roof of that one is damaged too.  The hairdresser is badly damaged by water, but it seems that the butcher's shop next door is all right.  He couldn't open up either today, of course.  There's speculation about how it might have started - it's untenanted and empty at present - but I daresay the truth will emerge.  Fortunately, it rained heavily in the night (I was woken several times by the noise) which probably helped to stop it spreading along the row.  I'm so sorry for Suzanne the hairdresser, but apparently she has already found somewhere to move to temporarily.  It was only a couple of years ago that the landlord had the buildings renovated - the same chap who did Al's renovations last year, he's really good and understands old buildings.

Al enjoyed his day off.  We went and had lunch at the café at the garden centre.  The woman who runs it already had an established catering company and the food is jolly good.  Al and Dilly wanted to go to the cinema this evening, so I offered to give the children their tea.  Weeza and family were coming over, but ended up arriving quite late so I suggested we all ate at about 6 o'clock - fortunately, I'd bought a couple of pounds of sausages and some bacon, and I added carrots, chips, tomatoes and macaroni cheese to the menu. The children were all really good and ate lots.  Now that Pugsley has stopped being difficult about food, he's much happier and so are mealtimes generally.  They are also extremely good about going to bed, and each chose a book for me to read, I chose a third and then gave them ten minutes to read to themselves before switching the light off.
Posted by Z at 11:50 pm

The last time I had my hair cut professionally (last August, as it happens) it was there. I saw this in the EDP yesterday, and wondered if it had affected Al.

Fortunately not, except for not being able to open. If it had been dry with a strong wind it could have been a real problem for adjoining and nearby buildings.

Who is the person standing on top of the dome L. of centre? It isn't Al finding out what's going on, is it?

Ah, that's the lady of the Buttercross, which has been the centrepoint of Yagnub since 1689. The town was pretty well destroyed by the Great Fire the year before - so most of the town centre is Georgian. She holds a pair of scales, but I think that's for weighing butter rather than justice.

She has only recently gone back up again, having been to a health spa for numerous layers of paint to be removed. She is very beautiful again now.

You can only just see the roof of Al's shop, just beyond that where the fire was and to the left of the Georgian house with the roof garden.

Herrjemineh - a real danger! Glad the damage was contained!

I used to chuckle about the lady on the buttercross - saying that Yagnub is a town where justice is obviously not blind... I think she's there to spot incomers.

It'll be a big job rebuilding, but fortunately no one was living in the flats,

The word is that it was started deliberately by someone with a grudge against James (who is such a decent bloke and you may bet he's done nothing wrong to provoke it), and it says it was arson in the paper.