Most surprisingly, I'm planning to join a bike ride - an organised one - for the end of the month.  If the weather looks okay, of course,  The local Rotary Club is setting one up to go round the Saints - here we are, darlings, I've done you a link (links are so easy now, aren't they?  One used to have to do carefully-learnt HTML).  Assuming you can't be bothered to click it, the Saints are several villages, a few miles from here, which are notoriously hard to find your way around.  There is going to be a race and a more relaxed excursion - not surprisingly, the latter is the one I'm interested in and Phil and Weeza are willing to come along too, though Phil would have to start by cycling here, 25 miles on the back roads, because two bikes won't go in the car.  We're going to check the weather forecast first, though.  Zerlina will be in her trailer and none of us would enjoy it in the rain.

It seems that the whole family will be away this weekend, apart from me and Squiffany.  Al, Dilly and Pugsley are going to London on Sunday and the Sage is likely to be in Gloucestershire.  Squiffany is going to a party on Sunday, so will miss the visit, but it's to see a friend of Dilly's who's over from Australia, so not geared to children's events.  I'm hoping for a blogmeet, with Eddie 2-Sox and his son, Sam 2-Sox.

All being well, we're hoping to get in a morning's bricklaying tomorrow.  We've marked the places where the ornamental bricks are to go, so that's what we'll start on.  Well, Dave will, I've got some other bricks to lay.

I'm not sure that I ever told you the end of the story about the fire in Yagnub - it turned out that it wasn't a grudge against the landlord after all, and that the flat was empty but was not unoccupied.  Apparently, a young woman lives there, she had a disagreement with her boyfriend just before going on holiday.  So, in spite, he broke in and set fire to all her stuff.  He was arrested the next day.  I should add, of course, because the case hasn't come to court yet, "allegedly".  The butchery was shut for a week but is open again now and there's scaffolding up, I saw the builder and the landlord there on Saturday.  The landlord looked harassed, poor chap.

English cherries now finished, but the first apples are in, and there are plenty of plums.  We had some gorgeous local raspberries this evening. 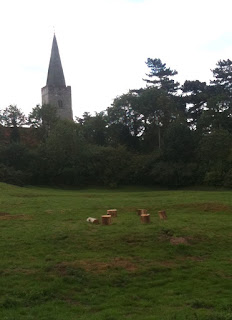 We seem to have some fairly hefty fairies in the garden, who have arranged some of the logs into a ring to dance in.  Or whatever fairies do in rings.
Posted by Z at 9:50 pm

I hope you have a gel seat for that ride

I believe they use them as seats. They sit around smoking their pipes and singing rude songs.

Fingers crossed the rain keeps off for you - or you could ask the fairies to cast a spell. . . .

Good luck with the biking. I've just cycled to Hunstanton and back (95 miles) with big Al (didn't he tell you?) and am somewhat saddle-sore. It was the grassy stretches of the Peddars Way that did it so you should be better on lanes.

I think Dave is thinking of Leprechauns, or possibly Pixies. Everyone knows that Fairies don't smoke.

No, darling, I just get a sore bum. Like Rog.

I don't go off-road, Rog. It would take very little to tip me off as it is.

Remember that there's Methodism in Dave's madness, Dand. In his world, fairies probably do smoke, though not necessarily tobacco.

I'll look at the forecast next week, Sandy, and only book up if it looks okay!

We've got some fairly hefty fairies where I work as well.

You mean the fairie-folk just sits in the greenery and gets stoned? Thorn apple pie for breakfast ...

Or perhaps an impromptu outdoor Sunday school gathering? Some traditional ecclesiastical buildings can be a tad musty even at the height of summer.

I reckon they are those biker fairies, up from Ipswich in their elfin black leathers, getting stoned and singing hymns. Non-conformist ones, like "shall we gather at the toadstool"