Bringing on the wall, Day 45 - Dave gets high

This morning, Dave reached the top course of bricks - only five of them, but it feels like another achievement.  He's also put in the first of the ornamental bricks on this section of the wall.

The ground sloped down on the drive side of the wall, and the footings are stepped down halfway because of it, by three bricks.  You can't see in the picture because there's some sheets of corrugated, as we say in these parts (it would be equally correct to refer to a sheet of galvanised), in front of it, but you can see that the grey bricks in the foreground are higher than the ones at the other end.  We hadn't taken into account those three extra rows in our calculations, so were prepared to have a step down in the height of the wall if we didn't have enough bricks - we need to do a count of the last palletful, in case there are many breakages, but we think we've got enough to take it to the same level all the way.  If we do so, I'll have to put in two more rows of bricks the other side of the pillar before the ornamental ones go in, so we need to be sure.

So, here are the pictures. 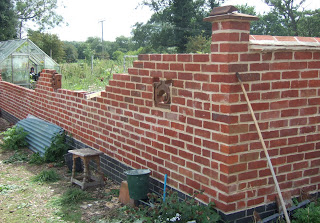 Levelling off the end section. 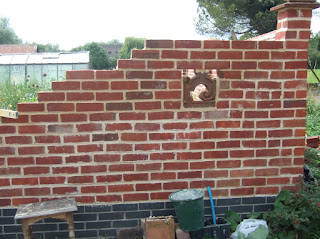 Dave put in the ornamental brick and then we both built around it. 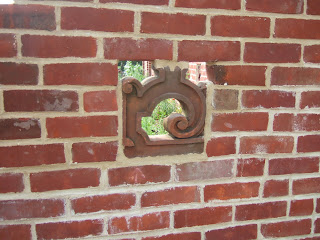 Dave said this went in very easily this time, they have been quite tricky up to now.

In the afternoon, we did more work on the fallen tree - not Dave, he went home after his sausages and chips.  I separated the logs cut on Sunday from the ivy cut off on Sunday and piled the latter, ready for a bonfire.  Then I went round to the root end and cut away rotten wood and cleared stones and earth, so that our friend had a clear area to cut with the chainsaw.  It was really hard work and is taking a long time.  I was pretty tired after a couple of hours, and covered with scratches and prickled by thorns.  I went in for a shower.  I'm not fond of showers, but needs must.  I was going out to dinner and I was filthy and dusted with sawdust.

There's still a lot to do.  The Sage reckons the whole tree probably weighs nearer two tons than one, and the more we clear away, the more apparent its size is.  At least we'll have enough firewood for a good long time.  Once all the logs have been split and stored, of course.
Posted by Z at 10:27 pm

Ask the fairies to cut up the tree. All they'll need is a plug of tobacco and a half of Aspalls.

That's never a joint stool Dave - or you - must have been standing on, is it?

I knew Dave's hanging out with them fairies.

We wouldn't stand on it, Chris, might damage it. No, we use it to stand the pail of mortar on.

I'm becoming quite disconcerted by Dave in the last few days, Mago. I think grandfatherhood is going to his head. Have you seen the post he put up today?

No, I will have a look at once.

The universe is a naughty place.