The tomatoes have grown visibly in the last couple of days, since I put them in the Dutch light greenhouse (though it's probably not noticeable in the picture), so I've taken a chance on the weather and put most of the other tender stuff in there too. If it's frosty, I'll just cover everything over with polythene or newspaper - that is, the latter if there's a frost forecast at night, but if it turns really cold, I'll have to put a clear plastic over them. I've done a lot of potting on today - in fact, I worked on it all for a good five hours. I was doing a lot of bending and lifting (nothing too heavy, apart from a bag of compost) and I ache, rather. I've still as much to do again, but everything is coming on well, apart from the courgettes that caught the frost, which are still looking a bit sad. 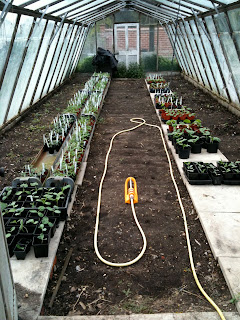 Al brought home a lot of strawberry plants, well-rooted runners that a customer had brought in for him to sell. They had been put in bundles of 10, wrapped in newspaper and secured with a rubber band, but not many had sold like that - so Al wondered if I might feel like potting them up? "Only if you'd enjoy it," he said hopefully. Fortunately, there was nothing I'd like more to do, so I potted all 88 of them - there were actually 90, but a couple of roots hadn't quite been in the water and looked a little sad, so I put each of them in with a stronger plant. The customer must have a lovely old garden - he brings in bunches of grapes, figs and peaches too, in a good summer and they are delicious. The peaches are the rarer white-fleshed variety. Fruit is evidently his 'thing'.

It's been the warmest day of the year so far, I should think. Far too hot to stay and work in the greenhouse, so I set up a makeshift bench and potted outside. A pair of blackbirds has a newly-fledged clutch of youngsters and they are still providing food for them. At one point, I found a worm in the compost and threw it onto a newly-watered patch of earth, meaning it to burrow down, but the male bird appeared from nowhere and snatched it up. I was rather sorry. You won't be surprised (bearing in mind that I'm the woman who kisses frogs) that I'm fond of worms. But I'm fond of birds too. The Sage is the one with a particular affinity for birds, though. He said that the other day he picked up one of the baby blackbirds to show the children. They don't mind him and nor do their parents. He often helps adult birds feed their babies by finding small insects - if I tried that, they'd abandon the nest, but they seem to appreciate the Sage as a friend. He's a crack shot and used to compete at Bisley, but he only likes target shooting (1,000 yards is his favourite distance. I'm not sure that I can see 1.000 yards, unless I'm outside and looking straight up), or clay pigeon. He used to be invited to a local shoot by its owner on Boxing Day, but he didn't care for it. He doesn't have the same objection to disposing of squirrels, however, on the rare occasions when it occurs to one to try setting up home here. Nothing is allowed that might raid nests and hurt his beloved birds.
Posted by Z at 11:28 pm

Your green house is bigger than my garden, haha.

I love potting up and on. It's a shame I can't get a job just doing that.

I like potting plants on, but can`t imagine myself having to do that quantity. I did 36 geranimums the other day and my back ached after that!
You must have "green fingers"!

Raising plants is what I do best - I used to grow loads of them for the middle school fete when I was on the PTA there.

We're right on the edge of the village and there's agricultural ground surrounding us, so there's plenty of room here. We were very lucky when a local florist who also had a smallholding retired a few years ago and we were able to buy this greenhouse very cheaply. It was a lot of work dismantling it and re-erecting it, but we'd never have bought it new - and it would still have needed to be put up. It's beautifully light and humid in there and plants grow very quickly.

Z, I've just bought 30 beetroot plants in the local market - should I have come to you first?

Your greenhouse is bigger than my home and part of the garden! Looks like a lot of work but also a lot of fun.

Roots are not my best, Christopher - you're better off at the market. Peas, various beans, squashes, pumpkins, courgettes (slightly browned by frost), spinach, chard, tomatoes, peppers hot and not, cucumbers indoors and out, aubergines and anything I grow but have forgotten to mention, such as lettuces and artichokes, I'm your woman.

The house sprawls too, anon. I likes my space around me. I am also incredibly lazy, so like my stuff within easy reach, so I just fill the other rooms with stuff we can't quite throw out.